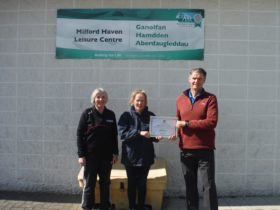 OVER 150 live music fans gathered in Llanelli over the weekend to celebrate the life of one of their own.

Three live bands performed at the Thomas Arms on Saturday evening (January 26) to pay tribute to Clive Jones, who played in many bands over the years.

Clive, who was 69, lost his battle with Parkinson’s Disease in May last year. He is survived by his wife, Heulwen; his two sons, Richard and Greg; and his grandson, Ryan.

A guitarist, Clive’s passion for music started in the 1960s, when he was a member of Llanelli bands including The Spartans and Freshwater Spring. He continued to gig with many other bands, alongside friends including ex-Llanelli policeman Robert Lewis, nurse practitioner Jonathan Lewis, and Wes Reynolds, of the Hall Street Blues barber shop.

All proceeds from the event will go to Parkinson’s UK, with over £3,000 having been raised.

Heulwen said: “It was a wonderful way to celebrate the life of my dear husband, Clive. It’s what he would’ve wanted – a night of live music, family, friends and laughs.

“But it wouldn’t have happened without people like Alison Trow, John Trow, Robert Lewis, Helen Lewis and others, who helped organise the event.”

Robert Lewis said: “Clive was like the older brother I never had. When I was growing up, I remember him helping out at my parents’ shop, Falcon Music on Park Street. He was a constant figure in my life, who is hugely missed by so many people.

“I was honoured to play his beloved Fender Stratocaster at the tribute night.

Reverend Eldon Phillips oversaw an auction on the evening, which included a signed shirt and ball from the Scarlets, a signed Mark Knopfler box set, and a painting by Llanelli artist Patricia Hazard.

Clive was brought up on Lakefield Road in Llanelli. He married Heulwen in 1970, later living in Swiss Valley, New Road and Pwll. He worked for companies including Llanelli Steel, British Steel in Trostre, and European Profiles in Llandybie. Clive also spent time working in Abu Dhabi in the early 1980s.