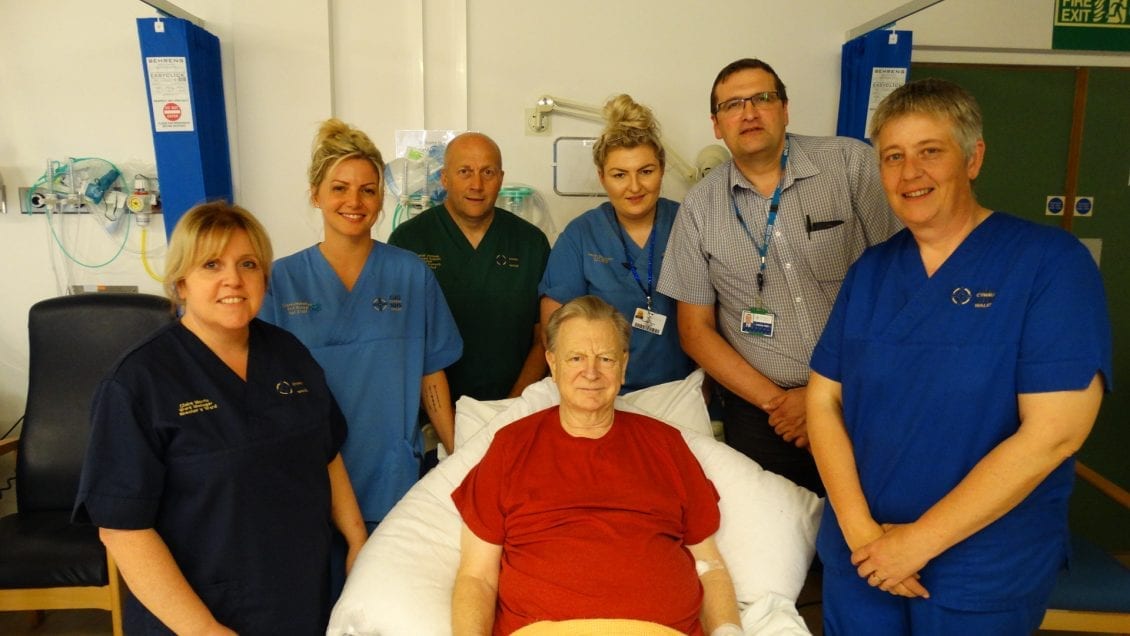 A “plumber turned electrician” has won a national award for his life-saving work at Morriston Hospital.

Dr Mark Anderson was one of the original trio of consultants who set up the hospital’s Cardiac Centre more than two decades ago.

He went on to develop a specialist interest in arrhythmia, or abnormal heart rhythms.

And it is for this work that Dr Anderson has received an Outstanding Individual Award from the Arrhythmia Alliance, a coalition of British heart rhythm charities and professionals.

“It’s lovely. I’m retiring in the next six months and it’s very nice to feel you’ve made a contribution that has been recognised by those around you,” said Dr Anderson.

“It’s very satisfying but at the same time you know you’ve only done it because of the people around you and what we’ve built here together as a team.”

Dr Anderson trained in London, qualifying in 1982 and working in several renowned hospitals in the capital before moving to Swansea in 1997.

He recalled: “That was when the cardiac centre opened. Three of us came – Mark Ramsey, Phil Thomas and myself.

“The centre was much smaller than it is now. The remit was to set up a service to do angioplasty and coronary angiograms and pacemakers, and that was it.

“But during my training I had done a lot of work on more advanced heart rhythm treatment devices, particularly devices called implantable defibrillators.

“I’d also trained in a technique called ablation, for getting rid of abnormal heart rhythms.

“People were very keen to get both of those things started here and really from very small beginnings where we were doing one or two procedures a year, we gradually built things up.

“By 2007 we were doing so many of these defibrillators and ablations that I couldn’t really do the plumbing work any longer, the arteries stuff.

“So I gave up being a plumber and became a full-time electrician in 2007.”

Some of their patients are young, in their 20s or 30s, who may be in otherwise good health but can experience sudden attacks of arrhythmia.

This is usually due to an extra electrical connection inside the heart, formed when the heart is growing. This can be treated with ablation.

“Then we have a group who are in midlife, and they often have disturbances in the top chamber rhythms of the heart – called atrial fibrillation,” said Dr Anderson.

“That can be very disruptive and give them very abrupt symptoms. We have a different ablation that’s a good treatment for that.

“Finally we have the older group of patients, 60s going up into their 80s, who are generally people who have had problems with furring in the arteries in the heart.

“They may have had previous heart attacks. They get rhythms that are due to scars in the bottom chambers of the heart and the standard treatment for that is an implantable defibrillator.

“So we see different groups with different rhythms but overall they are all amenable for the same kind of treatment – either ablation or some kind of implantable device.”

An ablation, sometimes known as a catheter ablation, uses heat or freezing on the area of the heart that is causing the abnormal rhythm.

It’s a sign of how much the service has grown in Morriston that, when Dr Anderson first arrived, patients requiring ablation had to go to Cardiff.

He undertook the first ablation in Swansea and now they are all carried out in the cardiac centre.

But his role extends beyond direct patient care, as Dr Anderson has been heavily involved in training countless registrars and arrhythmia nurses.

When new regulations restricted junior doctors’ working hours around 12 years ago, he also set up a training fellowship.

“This is a training post that sits outside the general Welsh junior doctor training.

“It enables us to give doctors from the UK or elsewhere advanced training in pacemakers, implantable defibrillators, and ablation.

“We have put at least eight or nine people through that training scheme. Some have gone off to be consultants elsewhere in the UK but many of them are still working locally.”