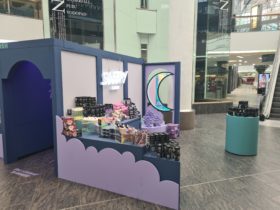 Lush pop-up that encourages a moment of calm

A new play, written by a BAFTA-winning writer and inspired by the experiences and stories of young people across Wales, is to hit the stage for two performances at Denbigh’s Theatr Twm o’r Nant.

‘A Day in the Life of Us’ has been written by critically acclaimed writer and director Janys Chambers and will be performed on Saturday 2 April at 7pm and Sunday 3 April at 2pm, with tickets for both performances available for free.

The play, which combines elements of drama, comedy, and pathos, tells the stories of a group of teenagers and the challenges they face over the course of one day, blending in popular music and original choreography.

Janys, who is also directing the play, said: “I think it will appeal to adults, young people, and families. They’re going to be surprised by the quality of the cast.

“We’ve been incredibly impressed by our young actors – it’s been really brilliant watching them bring the narrative to life.”

The cast, aged between 14 and 25, will perform alongside two professional actors; Arthur Bostrom, best known for his role as Officer Crabtree from the BBC series ‘Allo ‘Allo!, and Paislie Reid, formerly with the Royal Shakespeare Company and also a star in ITV’s The Worst Witch.

Janys added: “It’s incredibly important to give the next generation an opportunity to express themselves creatively, and to validate their experiences by telling their stories about their lives in Wales today.”

One of the performers is 16-year-old Eveline Clubley, who heard about the production through attending Rhyl-based theatre group the Phoenix Performers.

She said: ‘‘I’ve always been passionate about drama, and I’ve participated in various showcases, but ‘A Day in the Life of Us’ is unlike anything I’ve been a part of before.

“Learning from a professional team with so much experience and seeing how everything operates behind the scenes has been eye-opening and sparked my desire to do more theatre in the future.”

Eveline, who travels to the theatre from Prestatyn, is currently working towards completing her GCSEs at Ysgol Uchwradd Glan Clwyd.

She continues: “It’s really exciting to arrive at the theatre each morning as everyone is so fired up about taking part.

“My character Willow is pretty sorted, but she worries about her friends, and in rehearsals we’ve been drilling down deep into all the characters so the whole audience, as well as the cast, can relate to all the stories.”