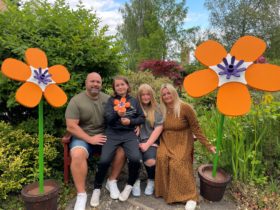 It will require the luck of the Irish and plenty of stamina as local businessman Richard Addison tackles a notoriously tough charity bike ride across Ireland this week – all for a very good cause.

Richard, 63, a Rhyl Cash Converters Franchisee owner, is taking on the 510 mile route from Mizen in the south to Malin in the north in aid of the Dreams Come True charity.

Dreams Come True is a national children’s charity, whose mission is to enrich the lives of terminally ill children and young people living with serious medical conditions.

Each dream costs in the region of £2,000 to fulfil and so far Cash Converters has raised over £250,000 since partnering with the charity four years ago.

Richard will be joined by fellow Cash Converter charity cyclists and businessmen Carl Murray and Paul Graham on the six-day bike ride which ends on Saturday 23 June.

The tough route passes some of the Emerald Isle’s most hilly, but breath-taking spots. The big-hearted trio completed a similar challenge in 2014, cycling from Lands End to John O’Groats and raised approximately £100,000.

But they all agree the Mizen to Malin “Head to Head” route will require some extra muscle power as they face the famously steep hills along the wild Atlantic coast line.

“We raised a tremendous amount on our last epic charity bike ride from the Southern Toe of the UK to the Northern Tip; but this challenge basically stretches the length of Ireland and will require some serious hill and mountain climbing. We are up to challenge and have been in training for many months.”

“It is incredibly rewarding knowing that with every mile we cycle, a child’s dream will come true.”

Cash Converters staff from all over the UK will be supporting the team in their fundraising attempts this week too. They’ll be selling raffle tickets in stores nationwide for the duration of Richard, Carl and Paul’s journey and beyond – up to 31st July. Tickets cost £2 and all the proceeds will go to Dreams Come True.

The hero trio will keep friends, family and staff up to date with their challenge daily by vlogging the challenge and sharing it on social media. They expect to reach the beautiful coastal town of Malin on the afternoon of Saturday 23rd of June, where they are hoping a cold pint of Ireland’s famous stout will be awaiting them.

“Yet again, Cash Converters are going that extra mile to support our mission to make as many dreams as possible come true for children living with serious illnesses. We are hugely grateful to Carl and his crew who are clearly up for a steep challenge over in Ireland. We will be championing them from the UK and look forward to celebrating their fundraising activities.”

“I applaud the team for taking on this mighty challenge. Cash Converters’ is proud to support all our franchise owners in these wonderful efforts to support worthy causes in our store communities. Dreams Come True is a charity we hold very dear as it creates life-long memories for very special children and their families.”