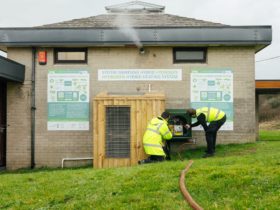 Cancer Research Wales has received £17,100 after 19 fundraisers from Whitchurch had their heads shaved for the cancer charity.

The team of fundraisers joined forces in April this year to take part in a ‘Close Shave II’ at The Malsters Arms, Whitchurch, and raised more than £12,000, while two more fundraisers helped boost the total a further £5,000 after running the London Marathon this year.

Cancer Research Wales was presented with a cheque for £17,100, which will be used to fund research that can result in vital developments into early diagnosis, treatments and cures for cancer right here in Wales.

“We are so grateful and thankful at Cancer Research Wales to all the participants who took part in this event.

“The money raised will go such a long way in helping Cancer Research Wales continue its vital work and research, run by world-leading scientists. Fundraising events such as this are fundamental to Cancer Research Wales’ ability to develop early diagnosis, treatments and cures.”

“We are proud that we have been able to raise more money for Cancer Research Wales. We have now raised more than £55,000 over the last 20 years for the charity, showing the dedication this community clearly feels to the charity which will hopefully be continued for years to come.”

Founded in 1966 by a small group of professors based at Velindre Hospital in Cardiff, Cancer Research Wales is now a major force in the discovery of new precision treatments for cancer, early diagnosis and progress towards cures. All the money raised by fundraisers goes directly to the world-class research projects that are being run in Wales.

You can still donate to the group’s Virgin Giving page at www.bit.ly/2CUaht1