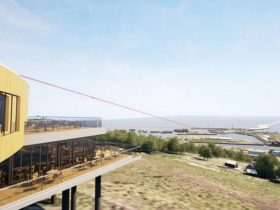 Children and staff at Ysgol Pen Rhos have given plans for a Life Science and Well-being Village in Llanelli a resounding thumbs-up.

They say the £200 million development set for Delta Lakes will boost local young people’s aspirations because of the high-quality jobs that will be created.

A state-of-the-art leisure centre is among the plans for the Village, which will be located very close to new Ysgol Pen Rhos building that’s nearing completion at the former Draka site on Copperworks Road.

Due to replace Lakefield Primary School and the Copperworks Infant and Nursery School, the new school building is being delivered through Carmarthenshire Council’s Modernising Education Programme, with funding via the Welsh Government’s 21st Century Schools initiative.

“This is an exciting time for Ysgol Pen Rhos. Our new school building will give current and future pupils a 21st Century learning environment and experience, with the Life Science and Well-being Village set to develop very close by.

“As a school, we’re 100% behind the Village because it will improve Llanelli, create more local employment and raise young people’s aspirations. We’re also an Attachment Aware School where nurturing groups are in place to support children who have experienced trauma, so we’re very supportive of the project’s focus on well-being.

“Many children from years five and six took part in a consultation exercise about the project late last year, where they were able to give feedback on what they’d like to see included on the site.”

The development is also part of the £1.3bn Swansea Bay City Deal programme, which includes 11 major projects across Carmarthenshire, Swansea, Neath Port Talbot and Pembrokeshire. Work is progressing with the Welsh and UK Governments to develop the bid to secure a £40 million investment for the Life Science and Well-being Village as part of this programme.

Ysgol Pen Rhos will be a new dual stream, bilingual primary, offering education through English or Welsh to children between three and 11.

Among the pupils’ ideas for the Village site were a swimming pool, health services for the elderly and vulnerable, and landscaped spaces for recreation and activities.

These features will all be included, along with business and research opportunities, education and assisted living accommodation.

Cllr Emlyn Dole, Carmarthenshire Council Leader, said: “It’s extremely encouraging that the children and staff at Ysgol Pen Rhos are so enthused about the Life Science and Well-being Village. This project will give the local economy a £467 million boost and create up to 2,000 well-paid jobs over 15 years, so it’s important not just to Llanelli, but to Carmarthenshire and the Swansea Bay City Region as a whole.

“Subject to planning approvals, work on the project is anticipated to start at the end of 2018, with the first phase earmarked for opening in 2021. Sustainability will be at the heart of the scheme, with an emphasis on ensuring the development is in keeping with the character of the nearby area.”

Like all projects being part-funded by the Swansea Bay City Deal, the Village will benefit from a skills and talent initiative that will give local people opportunities to access the high-value jobs that will be created.