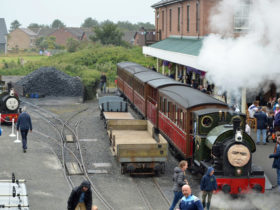 News that the first ever GWCT Welsh Game Fair is to be held in North Wales in September is music to the ears of Monty Williams.

A drainage engineer with YGC (Ymgynghoriaeth Gwynedd Consultancy) by trade, Monty is a familiar face across organised shoots in North Wales where he loads guns for guest shooters and takes his black Labradors to pick up driven game during the autumn and winter months.

“I think it’s amazing that the game fair is coming to the Vaynol Estate, near Bangor from September 9-11 and I am confident it will be a big success,” he said. “I think it’s important that we promote and celebrate the country way of life and everyone I speak to is full of excitement about the event.

“Shooting supports the hotels and restaurants in our communities during the quieter times of the year when there are not as many visitors here. The supply chain and jobs associated with shooting in the countryside is huge and I think politicians need to recognise this.”

Research by BASC (British Association of Shooting and Conservation) has revealed that shooting supports the equivalent of 2,400 full time jobs in Wales where 76,000 people shoot. There are 2,900 Welsh businesses linked to shooting which contributes £75 million from Wales to the UK economy.

On the conservation side, £7.4 million is spent annually in Wales where there are 490 full-time conservation jobs and 380,000 hectares of land are influenced by shooting.

Across the UK, 350,000 jobs are supported by shooting which contributes £2.5 billion to the economy in terms of money spent on goods and services. Shooting accounts for almost 10% of the amount spent on outdoor recreation in the UK.

In partnership with The Game & Wildlife Conservation Trust (GWCT), the GWCT Welsh Game Fair – https://www.welshgamefair.org/ – is being organised by Stable Events Ltd, which also organises The Game Fair in Warwickshire and The GWCT Scottish Game Fair in Perthshire.

Money raised at the Welsh event will support the GWCT’s conservation based charitable work and give a welcome boost to the region, with tourism and visitors contributing to the local economy.

Fishing, clay shooting, gundogs, game cookery, falconry, horses and hounds, as well as rural crafts, food and drink will feature at the event, which is expected to attract people passionate about the countryside, country pursuits and conservation.

Leading Welsh celebrity chef and author Bryn Williams, a farmer’s son from Denbigh, will be creating a bespoke menu for guests in a VIP Enclosure Restaurant – aptly named The White Park Restaurant after the famous Vaynol Cattle – and taking part in live, open-air cooking demonstrations throughout the weekend.

The VIP Enclosure and Restaurant are sponsored by Clogau, the iconic Welsh gold jewellery brand. A keen shooter and novice fly fisherman, Bryn is chef patron of Odette’s in Primrose Hill and at Porth Eirias, a beach-front restaurant, café and bar at Colwyn Bay.

Visitors can look forward to a wide range of attractions, displays, live debates, shopping at hundreds of trade stands and family entertainment, all with a countryside theme.

The event will be a fantastic shop window for the Welsh countryside and promote the unique culture and heritage of Wales. It will also bring together representatives from a range of conservation, farming, field sports and fishing bodies for debates on Welsh rural issues.

The aim is to foster greater communication and co-operation between sectors and promote the benefits of country pursuits and conservation to a wider audience.