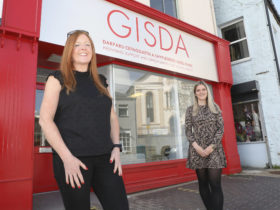 Bethan Scott has continued her mission after raising a remarkable £100,000 for the hospice that cared for her late husband.

Following the death in 2017 of her husband Dave, known to his friends and family as DRS, Bethan, who works at Nightingale House Hospice, vowed to raise as much money as she could for several charities close to Dave’s heart.

Her amazing fund raising will continue later this year when she will be trekking Machu Picchu, Peru in July and then climbing Mt Kilimanjaro in September. Machu Picchu and Mt Kilimanjaro will be Bethan’s third and fourth international challenge for the Hospice, having already trekked the Great Wall of China in 2018 and cycled from Vietnam to Cambodia in 2019.

Bethan has opened a Nightingale House Tribute Fund so that any money raised by her, and other members of Dave’s family and friends would be collected in one Fund.

Dave passed away on 12 August 2017 aged just 53. He was born in Scotland and left school at 16 to join the Merchant Navy, travelling the world before he joined Scottish Power where he had successful career for over 30 years.  Said Bethan: “He was such a sociable man; always interested in people and they were interested in him. He had many friends across the whole of the UK, if not across the whole world. He loved life, particularly the outdoor life. He walked, ran, cycled, and ski’d.”

One of the many ways Bethan raised funds was to hold an annual 15-mile Memory Walk from their home on the nearest Sunday to the anniversary of Dave’s passing. She has done this every year, even in 2020 when she was not allowed to walk with all her and Dave’s friends and family. Due to Covid restrictions, over 50 people walked the same distance over the same weekend but from their own homes and donated to Bethan’s JustGiving page in the same way as they would have done if they could have walked together.

On 14 August, Bethan and friends will walk their fifth DRS Memory Walk starting and finishing at the Wynnstay, Ruabon. To take part and/or sponsor Bethan and her 2022 events, please click on this link www.justgiving.com/fundraising/bethan-scott5

– Registration costs £10 and please leave your name on the page when registering.

“I have always thought by doing the things that Dave loved because I can, and by being active and getting together with friends, this was the way I wanted to raise funds for the hospice in Dave’s memory. Dave was super-fit – he was a runner and a cyclist, so to go from being so fit to then losing his mobility was simply tragic.

“Coming to Nightingale House and using the hydrotherapy pool helped Dave to became confident enough to start using the day care facilities. It became a life-line for us.

“I want to thank everyone for all the incredible fundraising support I have received over the last five years.”

Geraint Jones, Bethan’s brother added: “As a family, we still miss David dearly and have taken great comfort from the fundraising we have been carrying out in his name. From treks on the Great Wall of China and Machu Picchu to sponsored golf days, we are proud to support Nightingale House in all it does. I know personally how much comfort David got from the time he spent there. The care and support he received from devoted staff, coupled with the tender, caring atmosphere there, makes it a very easy charity to support.”

Neil Clitheroe, friend and former colleague at Scottish Power said: “While David’s early death still shocks me five years later, the care and support David received from Nightingale House has always provided deep reassurance and comfort. That is why their work is so important – for the patients themselves and the friends and family that support them – and why I continue to help them raise money by taking part in charity walks along the Great Wall of China and bike rides across Vietnam and Cambodia.”

Helen Edwards, friend said: “Nightingale House Hospice is such a special place for patients and their families. The care and support they provide is amazing at a very tough time. I have enjoyed fundraising for David’s memorial Tribute Fund. We held a fashion show and I have joined the Annual Memory Walk for Dave which is very well attended – the atmosphere is lovely. I am looking forward to it this year and hope to continue to help the hospice with their future fundraising.”

“You really get to realise how important Nightingale House is, when, as close friends, you see what he went through. Their professionalism is above and beyond, not only caring for their patients but also in the care and support they provide family and friends.

We enjoy fundraising in Dave’s memory whether that be coffee mornings, race days and in particular, Dave’s annual memorial walk, where we get together with other friends to reminisce and talk about David keeping his memory alive in our hearts.”

Delyth Underwood from the Hospice said: “I never knew Dave. I wish I had met him. Bethan has become a close friend, ever since we cycled from Vietnam to Cambodia together raising money for Nightingale House and was happy to share stories about their life together and the different countries they visited.

“He was obviously loved by so many and a truly inspirational man. Bethan has kept his memory alive and is one of the most inspirational people I have ever met, and does it all with a smile.”