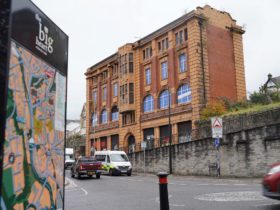 A Merthyr Tydfil resident is set to complete a world first to virtually cycle 18,000 miles – and with it, raise nearly £70,000 for cancer research.

Chris Daniel, 55, began the epic challenge last December and has now cycled the equivalent distance of cycling around the world on a static bike. The fundraiser was in memory of Chris’ wife, Rita – affectionately known as Rity – who died of bowel cancer in 2016. The £68,000 raised will be split between Cancer Research Wales, Velindre Cancer Centre, Bowel Cancer UK and Beating Bowel Cancer.

The ‘TACX Virtual World Ride for Rity’ saw Chris cycle up to 100 miles per day on a static bike since Friday 1 December 2017 and will culminate on today (Saturday 21 July) at Trago Mills shopping centre, Merthyr, when he will have reached 18,000 miles. Chris will be joined by supporters who are each cycling 25 miles to raise further money for the charities.

“I met Rita 38 years ago when we were aged 17. It’s amazing to meet someone you love when you are that young.  We were married for 33 years. When she was 48, Rita started to feel not quite right and her GP referred her for tests. In February 2012 we found out she had bowel cancer. Just remembering it takes me straight back into that room. We cried all the way home, we were both completely uncontrollable.

“A cancer diagnosis hits everyone; it’s like dropping a bomb and the ripples touch everyone.  And the closer you are to the person the more impact it has on you. It changes you and affects you forever. It is the worst. Unless you’ve gone through it, you just can’t explain it. It is total devastation.

“She was my rock, she did everything for me and was a fabulous mother to our boys. Shortly after she died we had our first grandchild; it breaks my heart as she would’ve loved being a grandmother.

“During Rita’s treatment we spoke about this cycle and she was the one that encouraged me to do it. She wanted to raise awareness of bowel cancer. It rips me to pieces every time I talk about it but I need to do it to get the message across. I will do whatever I can for the rest of my life. I gave up my job to do this. This ride is for Rity.

“It’s been tough, mentally and physically. Some days I had to dig very deep to get through it but I carried on pedalling knowing she would have been proud of me.

“The support from south Wales has been tremendous. An enormous thank you to my sponsors, the people that cycled with me, the donors, and especially to all the companies that hosted me – every single one of you made it a little easier each day.”

“Chris is a remarkable man. Sadly, so many of us know someone who has had to go through the devastating cancer diagnosis and the journey that follows. Our mission is to research ways to help those people recover and ultimately put an end to cancer. We can’t do that without the support from people like Chris who do extraordinary things to raise money and awareness. We have followed Chris’ challenge and supported him all the way and will be there to see him cross the ‘finish line’. We thank him so much for his effort and all those that have cycled with him.”