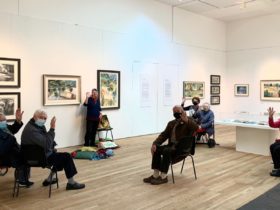 A talented young pianist won the top prize at a prestigious international festival after putting on a virtuoso performance.

Tomos Boyles, 21, from Cardiff, won the senior competition at the four-yearly Wales International Piano Festival at Galeri in Caernarfon.

He was presented with a £3,000 prize which was donated by food company Roberts of Port Dinorwic.

It was the second time Tomos  had competed at the festival. In 2016 he had taken part in the junior section.

He was extremely happy to win the first prize.

“I am in my third year studying music at Christ College, Oxford and I’m hoping to do post graduate study at a conservatory. I’m in the process of applying and winning this competition will be a boost. Certainly the prize will be a help towards living costs wherever I do go and study,” he said.

Tomos is an old hand at competing. Not only did he compete in Caernarfon five years ago he has taken top honours at the Urdd National Eisteddfod. But he admitted to being a lot more nervous when he is being judged.

“Knowing that someone is paying attention to every note I play makes me more nervous. I treated this competition like a performance that I wanted people to enjoy listening to,” he said.

Tomos added the acoustics at Galeri Caernarfon are very good and is envious of those who attend classes organised by Canolfan Gerdd William Mathias every week.

A former pupil at Cardiff’s Cathedral School Tomos has been playing the piano since he was eight years old. He hopes to become a concert pianist and his engagement diary is beginning to fill up with performances at Aberystwyth and Lampeter already lined up.

Meanwhile, Benji Lock 17, from Tondu, near Bridgend, scooped the £700 top prize at the prestigious International Piano Festival at Galeri in Caernarfon,

Benji has been playing the piano since he was eight and has been a student at the prestigious Purcell School in London for the past four years.

“I compete a little bit but my attention was drawn to the festival at Caernarfon and I thought I would give it a go.

“It’s a well-respected competition and it will certainly feature on my CV,” he said.

Benji says he listens to a lot of classical music when he was younger and decided he wanted to play the piano.

“My mum plays a little bit but not much. I got into it myself and she helped at the start,” he said.

In the future Benji would like to be a concert pianist and is hoping to study piano at a music college after he leaves the Purcell.

“I don’t know which one yet, I’ve got a lot more to learn” he added.

As a second subject Benji is studying composition and is particularly fond of film music. He has composed the score for some short films already.

This year the festival took on a hybrid format with the evening concerts pre-recorded and streamed online, while competitions and other events taking place live at Galeri Caernarfon.

It originally due to be staged in May 2020 to mark the year of the 250th anniversary of Beethoven’s birth in December 1770.

But due to the effects of global pandemic lockdowns and concert venue closures worldwide it had to be postponed again in October last year and again in May.

Despite  the setbacks caused by the Covid-19 pandemic, the 2021 festival attracted a full complement of competition entrants.

Organisers say it would not have been possible to put on the festival without the support of the sponsors which include the Arts Council of Wales, Colwinston Trust, Foyle Foundation, Gwynedd Council, Pendine Park care organisation via the Pendine Arts and Community Trust, Roberts of Port Dinorwic, Ty Cerdd, Snowdonia Fire Protection, A&B Cymru and several individual donors.

Iwan Llewelyn-Jones, the festival’s Artistic Director, said the standard of competition was “tremendously high” and congratulated all the pianists who took part.

“We had a good number of competitors from all over the UK and beyond.

“The standard of playing was tremendously high. Everyone had prepared meticulously and were very confident in the final stages.

“Several made strenuous efforts to attend despite the various Covid-19 restrictions, he said.

Iwan paid tribute to the competitors and supporters who kept faith with the festival and also festival administrator Catrin Morris Jones and CGWM staff who had worked incredibly hard to make it such a success.

“I’m so glad we were finally able to stage the festival. It is earning itself a niche all its own in the musical calendar and we hope to build on this.

“We took the decision to stage it in a hybrid fashion with pre-recorded concerts being streamed online and it worked well.

“I’ll be sitting down with other officials in the next few weeks and begin to plan the next festival. I already have some ideas in mind,” he said.