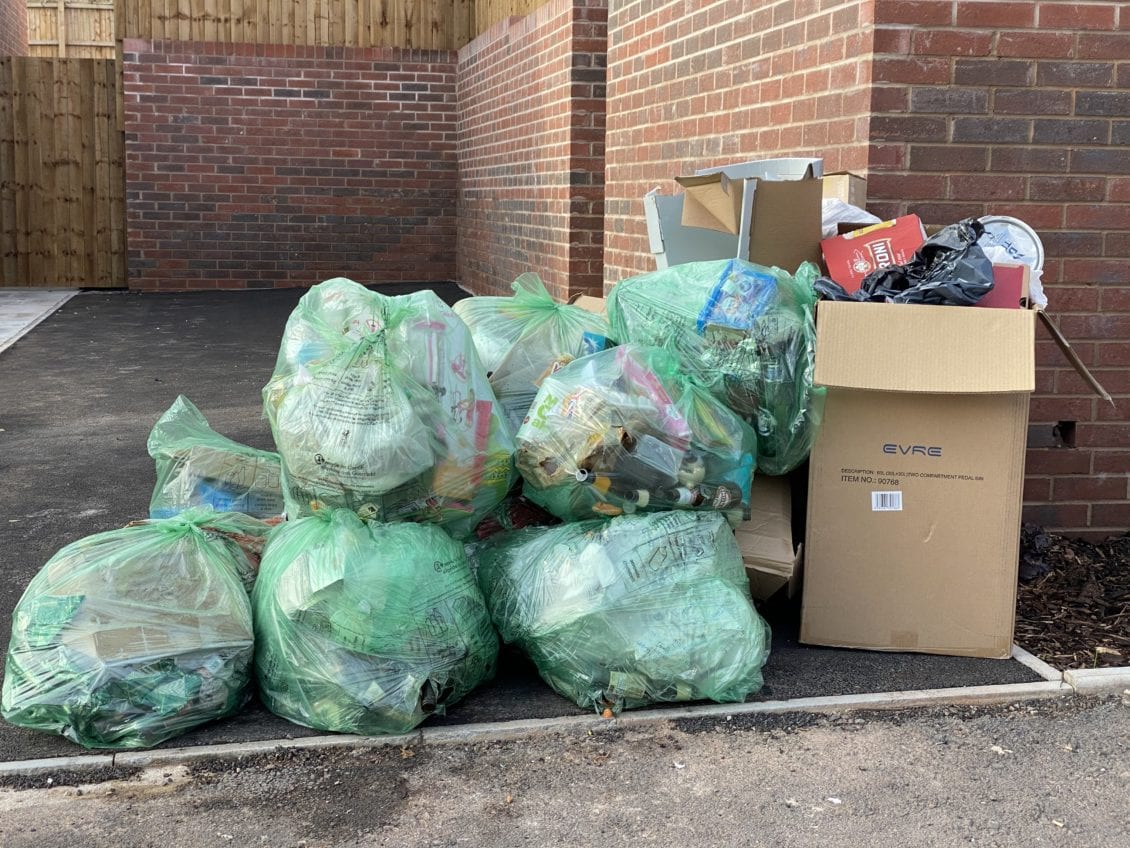 Rhondda Cynon Taf Council is investing a further £40,000 in its red dog waste bins and is improving the availability of ‘doggy’ bags in a bid to help irresponsible dog owners.

The majority of dog owners across the County Borough are responsible, but those that are not, are leaving their mess behind them for others to step in – or worse.

There are over 1500 red dog waste bins across the County Borough all situated in well-known dog walking locations and hot spots. The latest investment will now see more bins installed or replaced where needed and the addition of ‘doggy’ bag dispensers in key areas – there really is no excuse not to scoop the poop and bag it and bin it! This money is in addition to the budget allocated for the maintenance of the service.

This investment supports the latest campaign which aims to raise awareness and make irresponsible dog owner ‘SIT’ up and take notice, TWO simple messages have been stencilled in key locations across Rhondda Cynon Taf.

The messages are simple: ‘NO DOG FOULING’ and ‘NO DOGS ON PITCHES’. These are part of the overall campaign to take action to crack down on those who ignore the rules set out in the PSPO in Rhondda Cynon Taf.

In October 2017 the Council was one of the first Local Authorities to introduce strict rules in terms of dog controls, when it put in place a PSPO. Due to the success of this order, it was extended in November 2020 to continue to tackle this disgusting and unsightly issue.

The Enforcement team have upped their presence in hot spot areas across the County Borough and in the last year the Council has issued over 1030 Fixed Penalty Notices (FPNs) – to those who have been caught littering, fly-tipping, breaking the PSPO and failing to control their waste in Rhondda Cynon Taf. All the revenue generated from the FPNs is invested back in frontline services to further improve our County Borough and respond to the priority issues our residents have identified.

“The vast majority of dog owners are responsible but unfortunately some dog owners don’t seem to realise that failing to clear up after their dog’s mess in public places is illegal. It’s a dirty eyesore on our County Borough as well as having serious health implications for the community and we must do all we can to eradicate this problem

“After receiving complaints from local residents and seeing the problem for myself in some areas, the Enforcement team are now further increasing their presence to tackle the issue on the streets across the County Borough in a bid to catch those responsible for the disgusting mess.

“We are very fortunate to have such a pro-active and enthusiastic Streetcare Team who remain committed to using innovative schemes and initiatives to combat these blights on our towns and villages.

“It is hoped that the latest campaign messages will act as a gentle reminder to clean up after your dog – bag it and bin it and to not let their dogs walk on pitches.

“In 2020 the PSPO rules were extended due to their success and we will continue to use this order to tackle irresponsible dog owners – including on areas such as play areas used by children and marked pitches where residents enjoy playing sports.

“The Council would rather see a clean County Borough and dog walkers acting responsibly rather than issue fines – which could easily be avoided if we all follow the clear messages, follow the rules and act responsibly – they are there to protect everyone who want to enjoy out beautiful County Borough.”

Over the last year a massive 71 tonnes of dog mess has been collected by Rhondda Cynon Taf Council’s Streetcare staff – that’s equivalent to 17 refuse trucks full off dog poo!

The majority of that mess was collected from the dog waste bins that are installed in communities across the County Borough by the Council in order to deal with the problem.

But far too much of it was scooped up from streets, pavements, open spaces, town centres and even parks, which is disgusting, dangerous and illegal! Cleaning up irresponsible dog owners mess costs the Council hundreds of thousands of pounds every year and countless man hours.

The Council is also receiving reports of dog owners leaving their ‘doggy bags’ hooked on to bins, making them appear to be full, as owners do not want to touch the dog waste bin handles – where this is the case, the council is asking that where possible, you take the ‘doggy bags’ home and dispose of them in your own black bag/wheelie bin waste.  Remember to wash your hands after doing so.