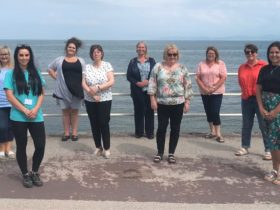 The Big Lunch, the largest gathering of neighbours in the UK, is back, and this year it’s aiming to smash the number of people involved in Wales.

Organised by Eden Project Communities, 2017 saw more than 350,000 people in Wales (12% of the population) either attending or organising a Big Lunch event.

More than just a meal, The Big Lunch aims to combine food with fun in order to improve the happiness and well-being of people across the UK and help to build stronger and better connected communities. However big or small the event, the aim is simply to bring people together and create positive change in people’s lives.

A new study commissioned by The Big Lunch, revealed that 6 per cent of people in Wales couldn’t identify a single neighbour and that 84 per cent were unable to identify all their neighbours in a police line-up.

The Big Lunch is all about breaking down these barriers, getting people together to share a meal and talk so that friendships and communities flourish. This year’s Big Lunch will be held on Sunday 3 June and it will be an opportunity to get involved in a UK-wide celebration of the people around us, the place we live and the joy of sharing food with neighbours and friends, old and new. However, a ‘Big Lunch’ can be held on any day of the year as it is simply a good excuse for bringing people together.

“The research shows how much potential there is for people living in Wales to get to know their neighbours better, replacing anonymous neighbourhoods with closer ties and stronger communities. A Big Lunch can be anything from a small gathering in a garden, park or driveway, to a larger party with trestle tables down the middle of your street. If the official Big Lunch date isn’t practical for your community, then you can run one at any time you fancy.

“The idea is that by starting simple, all sorts of friendships, ideas and projects can come out of a Big Lunch. It gets people together and talking — and with a few inspired folk, it can lead to people doing more within their community, and tackling the issues that matter to them most.

“Organising a Big Lunch shouldn’t be overly complicated, require a lot of resources or money: it can be as big or as small as you like. By making use of what you already have and doing a little research to see what others can share, you’d be surprised at what you can all bring to the table!

“We’ve put together a fantastic Big Lunch starter pack, that can be ordered for free by going to www.thebiglunch.com or by calling 0845 850 8181. These are full of everything you need to get started and are brimming with ideas, hints and tips, recipes, inspiring stories from past big lunchers – and even stickers!”

Nicole Burchett, Cardiff has organised a Big Lunch for her neighbours in Splott for the last three years. “We all know each other a lot better now and have swapped contact details in case we get locked out.  It certainly has brought us closer together and I think helped trust each other.  One elderly neighbour said he’d been living in the square since the sixties (I think) and it was the first time he’d experienced anything like it.”

Lee Whatley from Carmarthen, combined food and history to help bring his community together for a Big Lunch.

“Quite a few people turned up down to the fact that they had heard that I would be displaying old photographs of the area and most of my time during the Big Lunch period (11am – 3pm) was spent talking to groups of people about the old photos and gaining first-hand information about areas of the community that were demolished in the late 1970’s so for me it was a great opportunity as I had promoted the event under my “local history banner” and looking around it was nice to see groups of people sitting together talking about the photos.”

In North Wales, Anwen Roberts from Felinheli held her first Big Lunch in her local community hall last year. She then followed this up by facilitating a local lady from India to hold a Big Lunch in October to celebrate Diwali. They made Indian food, crafts, dancing and the children all dressed up.

Dawn Austwick, CEO of the Big Lottery Fund, said: “The Big Lunch is a really special annual event which creates new friends and closer neighbours. It has grown at an incredible pace, with 9.3 million people joining in last year. This research highlights the need for such initiatives, which help to build bonds and create happier and more resilient communities. When people come together great things can happen – for them, their wider community and ultimately for us all. This is why we’re delighted to be able to back this bright idea with money raised by National Lottery players.”