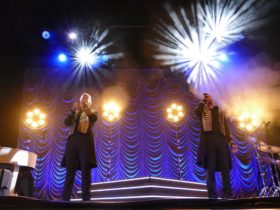 Stars to bring Broadway to Cardiff

The full inside story of how the giant wings of the Airbus A380 ‘superjumbo’ make their first ever journey is being revealed for the first time on television.

In their lifetime, the wings will carry the plane over 52 million miles in a 30-year flying career but first they have to navigate a tricky 18 miles on a barge on the River Dee.

TV viewers will find out how there is a precise window of opportunity for that voyage as the incoming tide lifts the barge clear of the Dee’s shifting sandbanks but not so high as to make its four low bridges impassable.

Each wing is 45 metres long, 12 metres wide and weighs 35 tons and new S4C series Llanw (Tide), made by Caernarfon-based company Cwmni Da for an international audience, charts that voyage.

Caernarfon-based Cwmni Da sent crews to four continents, taking in 10 countries and the Arctic to film the ambitious £600,000 series about the ocean’s tides.

Cwmni Da made the series in a ground-breaking partnership with four Celtic TV channels, TG4 in the Republic of Ireland, BBC Northern Ireland, and MG Alba in Scotland, and the LIC, the largest independent television production company in China.

Distributor Sky Vision also invested in the project via a Welsh Government fund which they administer.

The first programme in the three-part series called Llanw (Tide) will be broadcast on S4C at 8pm Saturday, June 2.

It was close to home that Cwmni Da filmed the Airbus wing’s painstaking journey that begins at the Aerospace factory at Broughton with the wing inched down and onto the barge Afon Dyfrdwy – Welsh for River Dee – on a huge motorised trolley.

The barge belongs to the Holyhead Towing Company and skipper Neil Coulson said: “Then we must wait for the tide. The Dee rivercraft has to negotiate four low bridges with sometimes less than a metre of water between the bottom of the barge and the riverbed.

“It’s a tidal estuary and the tide comes in very quickly. You can see as the tide gets closer the water gets shallower and then the wave will start breaking.”

Also on board is hydrographic surveyor Andy Jones, from Conwy, who maps the shifting sandbanks of the Dee every fortnight to make sure the barge and its precious cargo doesn’t get left high and dry.

He said: “The sandbanks move massively depending on the amount of fresh water coming down the river – as much as 100 metres in a week – so we survey the river every other week with an echo sounder and GPS.

“I have been doing this since the Airbus project started in 2004 and over the years we’ve got to know which areas change more rapidly so once we have mapped the changes we transfer it onto the barge’s navigation system.

“There’s a very tight window of opportunity because we have to leave Broughton on the flood tide to get down to Mostyn.

“We need half a metre of water underneath us and we leave on the flood to give us time to get down to Mostyn which takes two and a half hours.”

As well as the hi-tech wizardry on board the barge Andy and his colleagues also use more basic aides such as a traffic light system on each bridge with a board showing green, amber and red.

When the water has just reached the amber level it’s safe to take the barge through – if the water reaches the red the barge won’t clear the bridge.

Andy said: “A rising tide and a low bridge means the clearance is getting less by the minute.

“The operation is really a race against time where modern technology meets one of the oldest forces on the planet.”

Series producer Emyr Gruffudd, of Cwmni Da, said: “This aspect of the Airbus wing’s journey was something we certainly weren’t aware of and it was a great story for us..

“You have these huge wings which are the product of absolutely cutting edge technology and engineering and they depend on one of the oldest forms of transport and on the eternal power of the tide to make their first journey.

“It’s not often you get the chance to travel on a remarkable and fascinating voyage like that and to appreciate the skills and the preparation of the people involved in moving this large piece of equipment down the river.”

“Once the wings are safely unloaded at Mostyn the barge returns upriver while its cargo waits for the ship which will take the wings on the next stage of their month-long journey to Toulouse for the final assembly.

“The first programme in the series goes on air in Scotland and the Republic of Ireland on May 2 and then in Wales and BBC Northern Ireland on June 2.”