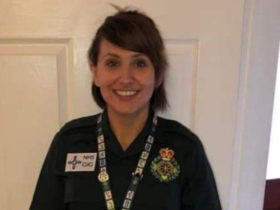 There was a time when we all hoped to be in a job for life but how many can claim today to have worked for the same employer – doing more or less the same tasks – for the past 50 years?

Now a still youthful and active 65, he might have eased off a little since he was an impressionable 15-year-old trainee gardener but despite now working just two and a half days a week as works supervisor, he still spends the vast majority of his time cultivating Cardiff’s impressive range of parks and gardens.

“I think I’m outside for perhaps 90% of the time,” said Mark, breaking off from tending to the borders at Bute Park. “And that’s much how I prefer it. I’ve loved this job from the day I started on £7 a week and I still love it just as much now.”

Things could have been so different, however. After leaving school in Caerphilly, his father found him a job at the Royal Ordnance Factory in Cardiff where he worked, for £18 a week, but young Mark preferred sunflowers to gunpowder and chose to work in the Parks department’s site in Llanishen, just down the road, instead.

“We grew shrubs and other plants for the whole of Cardiff’s parks and gardens there,” said Mark, “and it was a holding place for council equipment, too. I was there for two years and then moved to Wedal Road… and I’m still based here.”

He worked his way up to become the head gardener in Bute Park but 25 years ago the role of supervisor became vacant and he was promoted. His remit now still includes this spectacular landscape in the heart of Cardiff but also takes in Gorsedd Gardens, Cathays Park, the Civic Centre and others.

In 50 years he’s seen innumerable changes but the workload hasn’t eased – this Spring he will still have 40,000 bedding plants to bed in across the estate to ensure the green heart of Cardiff is as spectacular as always.

Mark’s manager, Operational Manager for Parks, Sports & Harbour Authority Jon Maidment, said:‘He is a much respected and highly valued member of the Parks team. His enthusiasm for and commitment to the service has not waned over the years, and he is a role model and source of inspiration for others.’’

Does he intend to carry on, beyond his ‘official’ retirement age? “I was going to retire when I was 65 in January but that came and went,” he said. “So I’m looking at July… or next January. The trouble is, I enjoy my work too much. Even when I’m not working I’m looking after my garden at home in Thornhill so when I finally do finish I won’t be a couch potato.”

Mark in a nutshell…