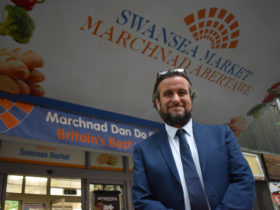 The city’s quirkiest and most beloved festival, The Swansea Fringe, is back, with sponsorship from Swansea BID (Business Improvement District) securing the event, which will line up three days of music, poetry, comedy and off-the-wall happenings in the City Centre from Friday, 5 October to Sunday, 7 October.

With close to 100 events planned across approximately 15 City Centre venues cafes, bars and arts spaces, Swansea BID (Business improvement District) has come on board as the event’s key sponsor, to help secure the festival for 2018, since the Fringe fell by the wayside as a key event in Swansea’s calendar more than 20 years ago.

Acts are being confirmed at the moment and scores have applied to be part of the festival this year. Over the coming months, artists performing at the Fringe will be showcased at various venues throughout the city.

“I’m really pleased to launch The Swansea Fringe 2018 and I can’t wait to unveil the line-up, and some city-wide interactive events, a little later in the year.  Last year’s festival was a thrilling one and it showed just how much of an appetite there is in the heart of Swansea for challenging celebratory, fun, arts events under The Swansea Fringe banner. It is appropriate that Swansea BID has signed up to be our event sponsor, since this is very much a City Centre event, with buy-in from so many of the Swansea BID businesses, and I’m grateful for their support.

“I feel very strongly that Swansea Fringe is back for good now – it has quickly become a part of the fabric of Swansea’s cultural life again, even after its long absence. In my book The Biggest Weekend will be a warm-up for The Swansea Fringe!”

Projects Manager at Swansea BID, Amelia Rudman, said: “It is great to see The  Swansea Fringe back on the calendar again – it is like welcoming an old friend back home. I’m pleased Swansea BID was able to help secure the event for 2018. In many ways this festival feels like the most quintessentially Swansea event of the year – it is full of character, verve and surprises – just like Swansea itself.  It is indisputable that there is a real buzz about Swansea at the moment, and a drive to help the city fulfil its potential. We can see this with the regeneration work that is going on and with events like The Swansea Fringe, which has already built up a head of steam and an enthusiasm among venues and acts to get involved.”

For further details, or to get involved in The Swansea Fringe 2018, go to: