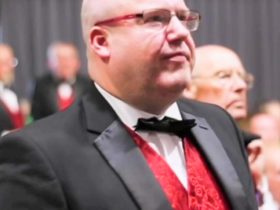 A young French man’s inspirational learning journey since arriving in Wales from France as a shy 16-year-old, following the loss of his mother to cancer, has been recognised with a prestigious national award.

Five years ago, Thibaud Gailliard could speak little English and had no formal qualifications or previous work experience to help his employment prospects in Wales.

Following the Traineeship, Thibaud progressed to a Level 1 ICT Users Award with Sgiliau who were so impressed that they employed him, enrolling him on a Foundation Apprenticeship in IT, which he has now completed.

In recognition of his learning journey, Thibaud, 21, from Ebbw Vale, was named Traineeship Learner of the Year (Level 1) at the Apprenticeship Awards Cymru 2021 virtual ceremony on June 17.

Thibaud said: “I came to Wales with nothing and now I have won an award. I can never thank Sgiliau enough because they have taught me absolutely everything. There was always someone there to help me when I needed support.

“I want to take more qualifications and continue to grow with the company.”

Celebrating outstanding achievement in training and apprenticeships, the awards saw 35 finalists compete in 12 categories on June 17.

Highlight of the work-based learning calendar, the awards showcased businesses and individuals who have excelled on the Welsh Government’s Apprenticeship and Traineeship Programmes and gone the extra mile to achieve success during these unprecedented times.

Jointly organised by the Welsh Government and the National Training Federation for Wales (NTfW), the awards had Openreach, the UK’s digital network business and passionate supporter of apprenticeships, as the headline sponsor.

Thibaud now speaks and writes English fluently. As lead administrator, he is in charge of Sgiliau’s management information database that generates important funding information as well as volunteering to support the company’s Traineeship IT learners.

“The transformation in Thibaud, from a 16-year-old who had low levels of English language skills and lacked confidence, is incredible,” said Charlotte Evans, a director of Sgiliau. “Considering the challenges, he has faced and what he has had to overcome, he is amazing.

“Thibaud is a great role model for other Traineeship learners and we are very proud of his achievements.”

Thibaud, who moved to Wales to live with his brother, describes Sgiliau as his new family. “I now feel like I belong somewhere and Sgiliau has given me an amazing career opportunity.”

Congratulating Thibaud, Minister for the Economy, Vaughan Gething, said: “Our award winners have excelled via the Welsh Government’s Apprenticeship and Traineeship programmes and gone the extra mile to achieve success during unprecedented and extremely challenging times.

“That’s why the new Welsh Government has committed to creating a further 125,000 Apprenticeship places over the next five years. We are a small country, but we have big ambitions, and our aim is to create a culture in Wales where recruiting an apprentice becomes the norm for employers.”