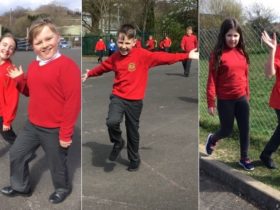 Pontllanfraith Primary raise money for charity in memory of pupil

The number of calls from people with cancer facing difficulties at work has shot up over two years – with some employers reported to be breaking the law – a leading cancer charity has revealed today.

New figures, from Macmillan Cancer Support, show a 74% increase in calls to its support line on a range of work-related issues such as discrimination and even dismissal, as a result of a cancer diagnosis.

A YouGov poll for the charity reveals that one in five (20%) employees who returned to work after cancer reported facing discriminatory treatment, such as demotion.  Worryingly 22% of managers in Wales also have concerns about employing someone who has or has had cancer.

It is also warning bosses they are breaking the law if they don’t provide the necessary support, such as reasonable adjustments, to employees with cancer – which is classed as a disability under the Equality Act.

While most of the people polled (87%)v who were employed when diagnosed with cancer said it was important to continue working after their diagnosis, employers’ ‘misconceptions’ add to the large number of difficulties already facing the 890,000 people of working age in the UK with the disease.

For example, more than a third (34%) of managers across the UK who had concerns worry their employee would not stay long in the job and nearly a tenth (8%) fear someone could use their illness as an excuse not to pull their weight at work.

Around one in eight managers have concerns about the impact of the diagnosis on other staff, with some worried it could cause awkwardness (13%) or resentment (12%) among colleagues.

Sadly, the research also found some workers with cancer did experience a lack of understanding of their needs from their employer (9%) and colleagues (8%). Others found it hard to negotiate a return to work (4%) as a result of their diagnosis.

Cathy Simms from Monmouthshire was diagnosed with bowel cancer in 2012 and faced years of workplace turmoil after her diagnosis led to problems with her employers.  Now running her own successful retail design business, Cathy said:

“I went back to work quite soon after my surgery because I had a family to support, but things changed dramatically in my role after my cancer diagnosis. I felt I was treated differently, often unfairly, and my relationship with the company director became quite volatile. I had no option but to find myself another job.

“I started a new role with an international shop fitting company who publicised a wide range of inclusive policies – I genuinely thought they would be sympathetic to the fact I had previously had cancer.

“Once my new employer discovered my cancer prognosis, I was again treated differently, and my job was made very difficult.  Getting time off for medical appointments was a challenge, I was made to work extremely long hours, given impossible deadlines and an unfair contract stating a £5k pay cut to the salary that had been agreed.

“It was only after I talked to Macmillan and became fully aware of my rights that I decided to challenge my employers.  What followed was an exhausting 2-year legal battle that eventually concluded that I had indeed been discriminated against.

“It was a heart-breaking process, during which my employer destroyed my confidence by implying I was incompetent. I had to attend court unrepresented and feeling fragile, but with written documentation from Macmillan confirming the law that covered me and always would as I had had cancer.

“I always remained keen and committed to my work – all I really needed was some understanding and some basic adjustments to help me get on with it.

“Nobody with cancer should have to fight their employers at the same time – believe me, coming to terms with a cancer diagnosis and going through surgery is tough enough all by itself.”

For others, the benefits of having an understanding employer and supportive colleagues remains a key part of their recovery.

Cath Harding from Porthmadog in north Wales was also diagnosed with bowel cancer in 2015.  She said:

“For me having a supportive employer, and colleagues who rallied around me, made such a huge difference.

“They gave me the support I needed to come to terms with my diagnosis, and my manager and the organisation I worked for gave me the time and space I needed for my cancer treatment and recovery.

“Quite often it is just some basic understanding that is needed – I would recommend that any manager or employer gets in touch with Macmillan to find out how best to support a colleague with cancer.

“Many people with cancer want to get back to work as soon as possible, either for financial reasons or just a blessed piece of normality.  There is plenty of advice available on how to make that process easier for them.”

“More and more people are being diagnosed with cancer.  Many of those will be of working age, where returning to work is not a luxury but a basic necessity.

“Employers need to know that the story of cancer is changing, with many more people now living for far longer after their diagnosis.  Unfortunately, we know that many bosses still have misconceptions about employees with a cancer diagnosis.

“The rise in calls we have experienced to our helpline is staggering.  It shows just how vital it is that people with cancer, and their employers, can access the right support and advice to help people  with their choices around work.”