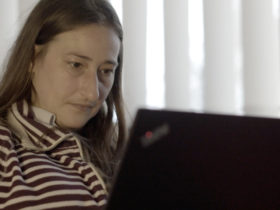 Laptop loan scheme praised for getting long-term unemployed into work

A farmer-owned creamery has joined forces with a quartet of top cooks for a new drive to promote “world-class” Welsh produce.

Each of the culinary maestros came up with a mouth-watering recipe for the campaign launched by South Caernarfon Creameries (SCC), based in Chwilog, near Pwllheli.

The creamery devised the social media campaign after all the summer events they usually attend were cancelled due to the coronavirus crisis.

According to SCC, they wanted to compensate for the fact that Welsh produce had temporarily lost an important shop window.

The campaign had provided a new showcase using cheese from the creamery’s popular Dragon range in all the recipes featured in live cook alongs and social media takeovers.

It produces 14,000 tons of cheese yearly using 100 per cent Welsh milk and delivers to most UK supermarkets.

Sam Lomas, who worked with chef, writer and campaigner Hugh Fearnley-Whittingstall at his River Cottage restaurant for more than three years says there is a close relationship between Anglesey Sea Salt and South Caernarfon Creameries.

He said: “It’s an amazing product and I’ve helped develop their smoked cheese. I love the way the cheese is produced and love the cooperative idea, with farmers working together.

“It’s almost like they have developed something that’s far bigger and better than the sum of their individual parts. It’s so important to have that farm to plate credibility, that to me is vital.

“North Wales is an area with so much potential, there are so many hidden gems and the range of locally produced top ingredients is mind-blowing. Dragon cheese is one of those ingredients it’s a stunning product and one I always enjoy cooking with.”

He added: “My Dragon cheese recipe is smoky cheese bacon and sea beet tarts. It uses local Anglesey ingredients and is a wonderful and uncomplicated dish using Dragon handcrafted Maplewood smoked Cheddar. It makes for a wonderful and delicious meal.”

Larger than life Chris Roberts, 35 , has seen his popularity grow after he posted mouth-watering videos and recipes on Facebook.

He said: “I’m right behind the Big Cheese campaign. Everything about Dragon Cheese is spot on.

“I wanted something special for my recipe so I used Welsh black brisket which I slowed cooked over many hours in a smoker. That cooks using very gentle heat and I cooked it overnight using cherry wood.

“I then served it with a flat bread and a salsa with a bit of a kick to it and a rich cheese sauce made from Dragon maple smoked vintage Cheddar with leeks. That sauce really complemented the meat and just leaves you wanting more. Absolutely mouth-watering and delicious.”

Imran Nathoo made it into the MasterChef quarter-finals three years ago despite working full time as a dentist and having a busy home life with two young boys to care for but says he has no regret about tackling the show.

He said: “I just love cooking but I want to connect with the food I’m using and where it comes from. It means a lot to me know people have gone to a lot of effort to produce what I’m using and eating.

“That’s why I adore Dragon cheese. It an amazing product in its own right but the fact it’s made from a farmers’ cooperative and produced on Welsh farms using Welsh milk means a lot. It is such a special product.

”The flavours and seasoning can be altered really easily so cooks can get creative. And you can keep it seasonal and fun then pair with your favourite Dragon Wales cheese.”

Mum-of-one Michelle Evans-Fecci was a contestant in last year’s Channel 4’s Great British Bake Off and survived until week five.

The 35-year-old print shop administrator says she was thrilled to be selected to appear on the popular show but feels she could have gone further had she appreciated just how competitive the show was.

She said: “I was brought up on a small-holding and I think that’s where I got my love of good-quality local produce.

“I use Dragon cheese all the time whether it’s for simple cheese on toast or a for a rich creamy lasagne topping. I’m just a massive fan of the product.

Megi Williams, the sales and marketing coordinator at SCC, revealed the campaign had proved popular.

She said: “Wales’ reputation as a centre for culinary excellence is growing and we like to think our award-winning Dragon range is helping to enhance our standing in the culinary world.

“Cheese is a fantastic and flexible ingredient which can be used for a simple sandwich or as part of a plethora of taste bud teasing dishes.

“Our four Big Cheeses  have been brilliant in showcasing not just our product but also a whole array of fantastic world class food from across Wales.”