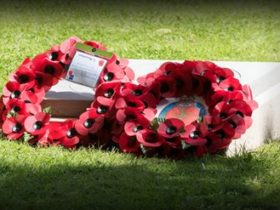 The Heritage of Orchards and Cider Making exhibition is going on a national tour of Wales this summer.

The project is funded by the Heritage Lottery Fund and run by the Welsh Perry & Cider Society in partnership with the University of South Wales-based (USW) George Ewart Evans Centre for Storytelling.

This two-year project worked to identify varieties of cider apples and perry-making pears. A tour to explain the findings is visiting venues across Wales (* see below).

These will including the National Waterfront Museum in Swansea, Caldicot Castle in Monmouthshire, Dyffryn House in the Vale of Glamorgan, and Erdigg Hall in Wrexham, during 2018, and Hereford Cider Museum from 2019, when visitors will get a chance to hear some fascinating stories of contemporary cider making and orchard life.

There are 10 stories in the exhibition, ranging from how apple varieties are named, to a year in the life of a cider maker. Other stories include a romantic account of an orchard wedding and a story detailing the revival of old wassailing songs. A further 80 stories are available online at the project website – www.welshcider.co.uk.

The project had three strands; working with community orchards across Wales, researching Heritage Welsh Cider apples and Perry Pears trees; while USW worked on capturing the Modern Story of Cider Making in Wales.

It also worked with 13 community groups across Wales to regenerate old orchards and/or plant new apple and pear trees.

During the work, cider and perry varieties were planted, while the community groups managing the sites were supported with skills to maintain and develop the biodiversity of the site. They were also given traditional orchard management skills to pass on to new volunteers and future generations.

The project identified and re-discovered a total of 99 Welsh varieties (39 apples and 60 pears), these were found all over Wales. This was achieved by DNA testing samples and then comparing the results to Brogdale’s National Fruit Collection database.

Where possible, the unique trees were propagated from graftwood, to create National Collections of Welsh cider & Perry trees.

These are being hosted at Abersytwth University, IBERS campus and two National Trust properties; Erddig Hall & Dyffryn Gardens. A forth one – the Society’s own Museum orchard –  is split over two sites, one in Llanarth and one just outside of Usk. These will all hold two of each variety, acting as a genetic resource to ensure the preservation of these varieties as a valuable part of Welsh natural heritage.

Juice from the fruit was fermented in single-variety trials. Information will be shared in an online catalogue of ‘Welsh Heritage Cider and Perry Fruit Varieties’.

​Catrin James, of the George Ewart Evans Centre for Storytelling, explained the success of the project.

“By travelling the length and width of Wales, a digital archive was created to capture the modern tradition of orchards and cider making in Wales,” she said.

“The archive is a collection of oral histories and digital stories, including interviews recorded with cider and perry producers, community orchard groups, heritage organisations and individuals involved in orcharding and producing Welsh cider and perry.”

Richard Bellamy, Head of the Heritage Lottery Fund in Wales, said: “The Heritage of Orchards and Cider Making in Wales was a truly unique project, using National Lottery funding to uncover some amazing fruit varieties that had long since been forgotten about. This work is not only fascinating with a great story to tell, but potentially really important for the British food and drink industry too. Thank you National Lottery players for giving us a sweet start to Spring.”

The collection is available online at The Welsh Perry & Cider Society website and is archived in the collections of The People’s Collection Wales and St Fagans National History Museum. This element of the project was delivered by the George Ewart Evans Centre for Storytelling at the USW.

Further information about all three areas of work may be found on the Welsh Perry & Cider Society’s website –www.welshcider.co.uk