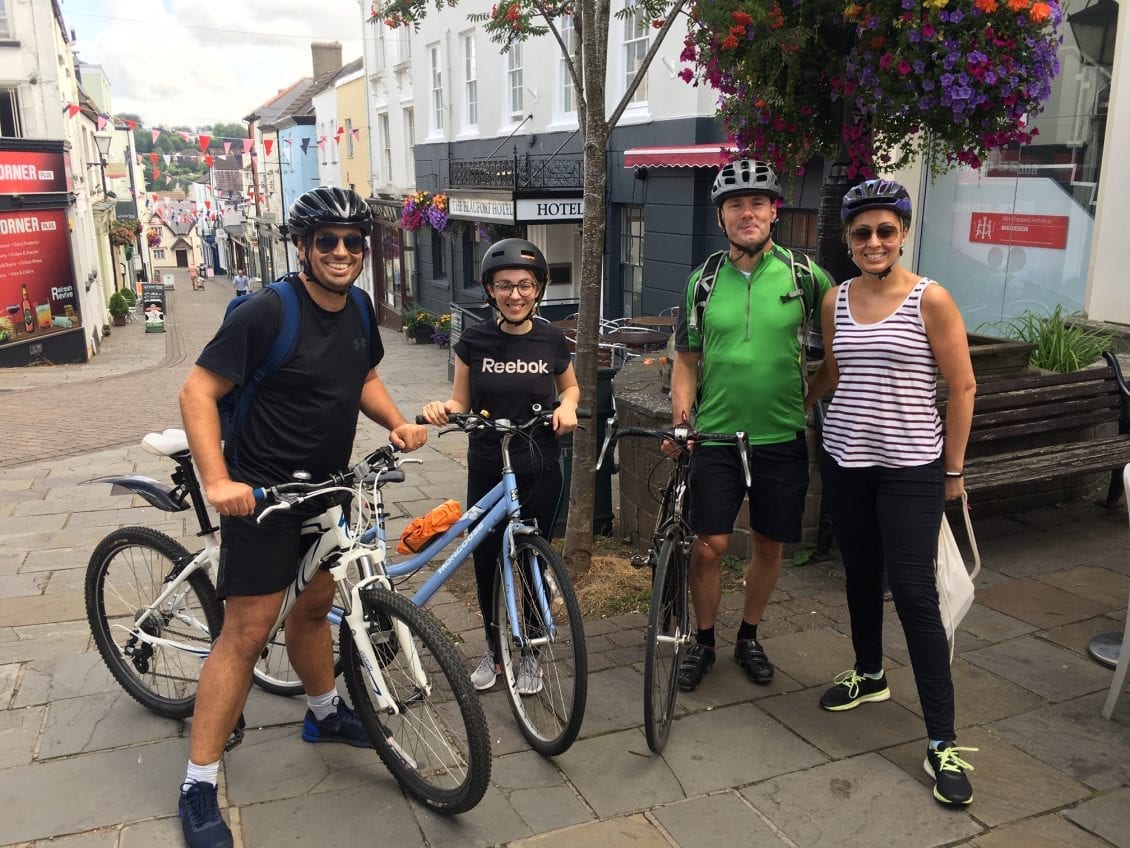 Staff at EE’s Merthyr Tydfil call centre have been inspired to support the British Heart Foundation in a series of epic challenges, following the loss of a much-loved friend and colleague who suffered a fatal cardiac arrest at work last year.

Despite the team’s best efforts, performing CPR and using a defibrillator on 42-year-old David Vaughan, who had previously shown no signs of a heart condition, he passed away suddenly after collapsing on 3rd June 2020.

Known as Dave to his friends and family, he was a Team Leader and had worked in the well-known EE office for 8 years. One of the key-members of the 1,000-strong workforce at EE, Dave is affectionately remembered as someone who always had a smile and time for a cheerful chat with his friends, who have installed a memorial bench in his honour in the building’s reception area.

With photos and personal items belonging to Dave tenderly placed there, it’s somewhere people can reflect on the positive impact this much-loved man left on so many lives in the community.

General Manager Allison McCarthy was one of the first people on the scene when Dave collapsed, and helped by performing CPR with other colleagues, taking turns to try and save Dave’s life. Allison is an experienced charity fundraiser herself and has taken on several inspirational challenges for good causes over the years, including climbing Mount Kilimanjaro, trekking from Vietnam to Cambodia, and cycling the Road to Mandalay in Burma for the BHF, and she’s planning on taking on Tenby’s Iron Man challenge this September.

Having managed the office since it first opened, Allison had known Dave since he joined EE in 2012. “Everyone loved Dave,” she says: “He was the sort of person who made an impact as soon as he walked in the room, he just made everyone happy. He was a local man as well, he grew up in Merthyr and his niece still works here, so it really is a family atmosphere in this building, it’s a very special place.”

On behalf of his team, colleague Sarah Thomas reflects: “The self-managed team in Merthyr have always been a small close-knit family of agents. Working alongside each other during 12-hour shifts gives you a closer relationship than most jobs.

“In a fast, challenging environment everyone needs someone that can bring your spirits up and keep you focused and be the heart of the team and we had that in our friend David Vaughan. From making jokes about Columbo and old TV shows.

“With his trademark hat, catchphrases and the occasional dad-joke he was the funny bones of the team. Everyone who knew him loved him and his sense of humour. We never thought for a minute that his future was limited.

“We lost our friend in less than 10 minutes on a normal, average work day and our team was changed. Our future isn’t promised to us. Love those around you that make your day that little bit better.”

Leading the fundraising efforts in Dave’s memory is Sharon Palmer. She says: “We wanted to do something positive in Dave’s memory and decided raise money for the BHF because heart conditions affect so many people in our community. When I started working here in 2017, I joined as a team leader and managed Dave’s old team.

“He was so welcoming to me. He was extremely caring and supportive, helping me learn new systems. He was just marvellous; he’d always bring you a cup of tea and stop for a chat. His catchphrase was ‘Have a nice tea!’ and we’ve had that engraved on his bench in reception. He really was one in a million.

“He was always thinking of others,” remembers Sharon: “His loss was devastating to so many of us and I decided I had to do something. It was at the height of the pandemic, and I felt I needed a focus. My first target was walking 100 miles, then when I hit that, it was 200. I walked miles, before and after work, at weekends. During the summer last year, I was walking early to avoid the heat, and heading to Porthcawl where it was cooler. To mark the anniversary of him passing, I’m doing a month-long challenge.  I find it therapeutic.”

Colleagues from around the building started joining Sharon on her walks. “We walk and talk,” she says: “The last few years have been hard for all of us, and it’s really helped lots of people share things they might not have talked about otherwise. Several of the younger members of the team are coming out during their breaks, and even booking leave to join me on the walks.”

Sharon’s longest distance in a day was 38,00 steps – over 19 miles. Over the last two years she’s worn out two pairs of trainers and has raised over £2,500 for the BHF’s research. She says: “Other than motherhood and becoming a grandmother, this has been the biggest achievement of my life. Raising money to help other people has taught me so much. Knowing people had my back has made me a different person. It’s made me want to make a difference with my life. Some days I wanted to give up, but I had to keep going because I was doing it for Dave, and everyone who’s living with a heart condition.

“What happened to Dave could happen to any of us. I’m turn 54 in July, my grandson Zion is 2 in August, and I want to be around to see him grow up.”

Sharon isn’t the only member of staff fundraising for the BHF at EE. Tyler Mazoni, set up a tuck shop in Dave’s memory, which opened at the height of the pandemic, when the staff canteen was closed, and operates as an honesty box with staff leaving donations in exchange for snacks and drinks.

In total the team at EE have raised over £7,500 for BHF research into heart and circulatory diseases, which affect 340,00 people and cause around 26 deaths each day in Wales. Since the BHF was established in 1961, the annual number of heart and circulatory disease deaths in Wales has fallen by half. There are currently around 2,800 out-of-hospital cardiac arrests in Wales each year, but only 1 in 20 people survive.

BHF Cymru’s fundraising team visited the EE centre to deliver a CPR training session for more than 30 staff, providing vital life-saving skills. Everyone attending was encouraged to share the BHF’s free CPR training App, RevivR, with friends and family. In 15 minutes the easy-to use app teaches how to perform CPR when someone has a cardiac arrest. They were also told about The Circuit – the National Defibrillator Network – which everyone responsible for a public access defibrillator is encouraged to sign up to, so more defibrillators are registered with the Ambulance Service and can be located in an emergency.

Area Fundraising Manager for BHF Wales & Northern Ireland, Nikki James says: “We are so grateful to everyone at EE in Merthyr for their phenomenal support of BHF Cymru. It was an honour to meet the team and thank them in person for what they have done in memory of Dave. BHF is the biggest independent funder of heart and circulatory disease research in Wales, and in the last 5 years, we have funded £9.5m worth of research here, supporting the work of 64 researcher staff. We urgently need the public’s support to keep our life saving research going, and to discover the treatments and cures of the future.”