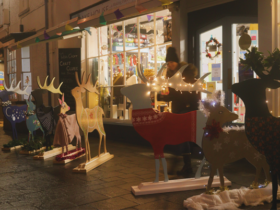 Festive reindeer trail in Abergavenny gets residents into the festive spirit

By teaming up with award-winning Cardiff catering company The Tidy Kitchen Co, Matt will be bringing his unique brand of rock ‘n’ roll veganism to The DEPOT, and serving up a five-course vegan feast inspired by his recent trip to Bali.

On the night, up to 100 ticket holders will also be able to enjoy music from a live DJ, and drinks from a bar stocked with vegan wines, beers and spirits.

Tickets for the event are available now and are priced at £45 which includes a welcome drink, welcome talk from Matt, the five course feast, and music from a live DJ.

Matt Pritchard rose to fame in the early naughties as part of the rag-tag group of skateboarders featured in MTV’s cult stunt-show, Dirty Sanchez.

More than 10 years after the show ended, he’s back in the pubic eye for very different reasons. Since turning vegan in 2015, he has cultivated a dedicated following for his YouTube-based cookery series called Proper Vegan Cookin’.

In 2018, he became the first person to complete a triathlon circumnavigating his home country of Wales, an achievement which was covered in an hour-long BBC Wales documentary, Wild Man to Iron Man.

And in early 2019, he hosted Dirty Vegan, the BBC’s first ever vegan cookery show, and has also produced a best-selling tie-in cookbook for the series.

Matt explained why a massive vegan supper club was the obvious next step.

He said “If someone had told me a few years ago that I would have a vegan cookery show and cookbook, I would have laughed my head off. But life takes you in strange directions, and the reception to the book and the show has been so good, that I want to get out and cook for as many people as I can.

For this event I’ve teamed up with another chef called Laura, from The Tidy Kitchen Co in Cardiff, so we can make it as big and as bad-ass as we possibly can. We’ll have big tunes, and a great venue, and now we’re just really looking forward to making hundreds of people happy with our banging vegan grub!”