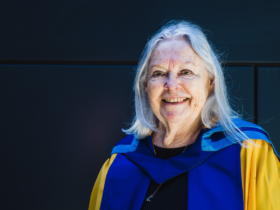 Gillian Clarke honoured by The Open University in Wales

Daniel O’Toole and Simon Pirotte have been named winners at the prestigious national Institute of Directors Awards.

Daniel, CEO of Newport-based Retail Merchandising Services (RMS) was named New Director of the year while Bridgend College’s Principal and CEO Simon Pirotte, was named winner in the Public / Third Sector category, which focuses on leaders of charity or non-profit organisations serving the good of the community.

Both had won the same titles at the IoD Wales awards in May. Winners from each region are considered for the UK-wide shortlist, with seven Welsh winners being shortlisted for last night’s glitzy final at The Royal Horticultural Halls, London, which were hosted by Strictly presenter Claudia Winkleman.

Daniel took over the helm of RMS following the death of his father Peter O’Toole in 2015, 10 years after he established RMS and became one of Wales’ most respected entrepreneurs with the aim of making shopping more attractive.

Peter, founder and chief executive of Langstone-based RMS was posthumously recognised at the same awards in 2015 when he was highly commended in the Director in an SME category following his triumph in the Medium / Large category at the Wales awards earlier that year.

Dan attended the awards with his brother Connah, who also works for RMS, and judge James Morris, Managing Director of JF Marquees said he is ‘impressive, building and growing on a solid legacy. This director has continued to drive the business and its business forward in a challenging retail environment.’

During his time as CEO, Daniel has ensured that the company recognises the effort and commitment of its people, primarily by increasing the pool of direct RMS employees and introducing the ‘RMS-First’ policy. Under his leadership, the company has continued to grow. Securing new multi-million-pound client Sainsbury’s was a major accomplishment, as was signing a contract with Boots which has seen RMS become involved in a revamp project across 400 stores.

Daniel, whose father lost his battle with mesothelioma, a rare form of asbestos-related lung cancer at his home in Llanwern, said:

“It was strange being back at the same awards, three years after collecting an award on behalf of my late father.

“It was an incredibly proud and emotional moment. I would like to thank all our amazing ‘RMS family’ who have stood by my brother and I through a difficult three years as the business has transformed and grown.

“Robert Lloyd Griffiths and Jean Church at IoD Wales have been so supportive since meeting me for the first time three years ago. They have mentored me and helped me overcome serious challenges as well as capitalise on big opportunities.”

When Simon Pirotte joined Bridgend College just over four and a half years ago, the college had significant financial difficulties (only ‘8 days cash” liquidity’), was facing further cuts in funding and had the worst learner results in the sector.  Now, it produces regular surpluses and has the best outcomes in the sector, Simon’s leadership of this remarkable turnaround was recognised in the College’s most recent Estyn inspection which culminated in a rare ‘double excellent’ judgement.  These results were achieved during a period of significant change and yet the College was also awarded Times 100 Best Companies to Work for status, the highest-ranking FE college in the UK.

Judge Fred Langford, Deputy CEO at The Internet Watch Foundation (IWF) said Simon is ‘A clear inspirational leader who is empowering employees to be a part of the mission of Bridgend College. Extremely impressive results, financially as well as being motivational.

Simon will now lead the college through an ambitious Estates strategy which will include two £30m campus development projects that will be a catalyst for regeneration in Bridgend.

“I was absolutely thrilled to represent Wales at these awards and I am delighted to win. During these austere times and during #LoveOurColleges week, it is a fantastic recognition of the incredible work of all staff at Bridgend College and indeed everyone across the UK FE sector.”

“I am thrilled and delighted at the Welsh success at the IoD national awards.

“We have previously acknowledged the level of leadership demonstrated by both these directors, but for Welsh companies to be recognised on a wider, UK-wide stage is a great accolade.

“Our eight Welsh winners who were shortlisted last night have much to be proud about – the organisations in which they working innovative, dynamic and pioneering amd are run by successful, cohesive teams, created, guided and led by motivational, inspiring leaders.”

In another nod to Welsh business success, Andy Palmer, CEO of Aston Martin, was named overall winner and was awarded the Neville Bain Memorial Award for Director and Board Practice for his work taking the car company to its first annual profit since 2010, and on to a stock market listing.