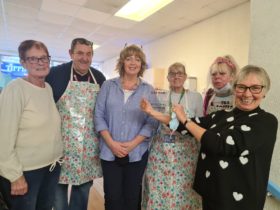 More Valleys schools will soon have access to an award-winning project which has seen a converted shipping container become a focal point for hands-on learning about food as well as a place where low income families can stock up on free or reduced price provisions.

The Big Bocs Bwyd (BBB) Project in the Valleys Taskforce Area helps children develop an early understanding of healthy food choices while providing affordable priced food to families in the community who may be in need of support.

The Welsh Government is providing £100,000 to establish a further five BBB shipping containers in schools across the valleys, working in partnership with the Valleys Regional Park.

The scheme originally started at Cadoxton and Oak Field primary schools in Barry, thanks to the hard work of Executive Headteacher Janet Hayward and teams of staff at both schools. The project operates from converted shipping containers based on the school grounds. Food is donated from local supermarkets and shops. Charities such as FareShare, which aims to reduce food poverty by re-distributing quality surplus food produced by the food industry, are also part of the scheme.

Cadoxton and Oak Field Primary Executive Headteacher Janet Hayward, who will help oversee the roll-out of the programme, said: “It is a privilege to be able to share the success of this project with these other schools and the communities they serve in such a real way. The idea has evolved over time for us but is now a concept that can be easily transferred into new settings. As well as ‘recycling’ food from supermarkets that would otherwise be thrown away, the projects supports many aspects of the Health and Wellbeing curriculum”.

Deputy Minister for Economy and Transport Lee Waters said: “The benefits of the innovative Big Bocs Bwyd Project are clear to see. Developing greater food literacy among children is absolutely key to building confidence around how to process and cook different foods, and the learning resources on offer will help them to understand and appreciate the connections between food, nature and the economy.

“The project is also important in offering good produce to local families for free or at affordable prices which will benefit their people’s health and wellbeing.

“The project has already been very successful in Barry and I’m delighted Welsh Government funding will now see it roll-out even further into the Valleys Taskforce Area.

“The Taskforce is about making real differences to communities and is just one of a series of projects, like our Empty Homes Grant Scheme which is bringing empty houses back into use, and our Transforming Towns Valleys Taskforce initiative which is helping to regenerate our high streets. This work is about creating a legacy that will improve the lives of people living in our valleys.”