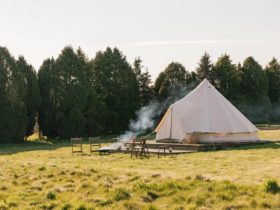 A group of determined veterans are on a mission to restore a dilapidated war cemetery in honour of 48 fallen First World War heroes with the help of cash confiscated from criminals.

Former soldier Keith Jones, 63, teamed up with six other ex-servicemen to give restore the graveyard at St Peblig Church in Caernarfon that’s been blighted with a overgrown shrubbery, graffiti, litter and even broken headstones.

The volunteers, whose ages range from 50 through to 80, set to work in the first national lockdown and have been using their own tools and sheer hard work to cut away brambles and bushes and remove graffiti.

Now their efforts have been bolstered by a £2,500 grant from a special fund distributed by North Wales Police and Crime Commissioner Arfon Jones which will cover the cost of new cutting equipment, replacement blades for tools and fuel for machinery.

The Your Community, Your Choice initiative is also supported by the North Wales Police and Community Trust (PACT) which is celebrating its 23rd anniversary this year.

It is the eighth year of the awards scheme and much of over £280,000 handed out to deserving causes in that time has been recovered through the Proceeds of Crime Act, using cash seized from offenders with the rest coming from the PCC.

The scheme supports organisations who pledge to run projects to tackle antisocial behaviour and combat crime and disorder in line with the priorities in Commissioner’s Arfon Jones’ Police and Crime Plan.

This year, there are 21 grants and more than 32,000 votes have been cast to decide the successful applicants with Llanbeblig Churchyard one of three winners in Gwynedd, alongside Caernarfon Cricket Club and the Friends of Wern Mynach in Barmouth, to receive £2,500 each.

The cricket club plan to restore an artificial pitch damaged by arson which will enable them to continue coaching sessions and go ahead with a schools tournament this summer, and the Friends of Wern Mynach are developing a community edible and sensory garden and play area.

The churchyard contains some 2,500 graves including the remains of 48 First World War soldiers whose deaths span the years from 1914 through to 1918.

Most of the historic war graves had become inaccessible due to overgrown shrubbery. Graffiti, broken headstones and used needles also littered the area.

During the first national lockdown the veterans, together with a 20-strong team of volunteers, began the mammoth task of clearing one corner of the graveyard.

Now, with the aid of a funding grant, they hope to clear and preserve the remaining area by next summer.

Mr Jones, who served in the Royal Welch Fusiliers between 1974 and 1997, said: “We are really grateful to the Commissioner for this funding. The money will go towards safety equipment, fuel for the machines and equipment such as skips if we need them.

“We have tools between us but the blades from the strimmers are starting to go so we will need to replace them on a regular basis and we also need wheelbarrows, shovels and some sort of cabin for storage.

“Up to now, we’ve all been dipping into our own pockets to buy what we need. We are doing it all by hand and through volunteers.

“We call ourselves the Magnificent Seven! We are plodding along nice and slow but the weather hasn’t really been on our side.

“When I saw the advert for funding, between myself, the chairman and vice chairman, we created a formal committee with the remaining four veterans as committee members and were delighted to be accepted for a grant.”

The grandfather-of-six, from Caernarfon, said he first realised the condition of the graveyard when he returned home from the Army in 1997.

Over the years, the site deteriorated further until Mr Jones and a group of veterans decided it was time to do something about it.

“It was very neglected. When we did our original reconnaissance, somebody had created a hidden drug den and had lived in it in the centre of the cemetery,” he said.

“We came across plenty of empty beer cans, bottles, needles, you name it, it was under all the rubble, but since we have been clearing the area, we’ve noticed there are no new cans, bottles or needles at all.

“It was very important to us to clean it up, not just for the war graves but out of respect for all the 2,500 people buried here.

“We split the cemetery into seven square areas and I got the map out. We started in August and finished in September when the weather started to change.

“We had 20 volunteers in the first stage but that has dropped off to seven because of the lockdown restrictions. We’re hoping the weather gets better to get more volunteers back.”

The volunteers are using shredded bark to line a new path around the war graves, which has been prepared with plastic to prevent weed regrowth.

On Remembrance Sunday they held a memorial service hosted by a local vicar and Ministry of Defence (MoD) chaplain.

“We’re hoping to instil pride in the community,” said Mr Jones, who has four grownup children.

“We’ve had great feedback – we were even contacted by the Commonwealth War Graves Commission which was helping someone from Stockport to locate a relative’s grave.

“The relative came out to visit but they couldn’t get to the grave because of the condition of the cemetery. This is the very reason why we are doing this.

“When you walk around the town people say ‘Well done Keith, you’re doing a great job’. That goes a long way and it’s nice to feel appreciated.”

North Wales Police and Crime Commissioner Arfon Jones said: “Last year we sought applications that aimed to build resilient communities and this year we have continued that theme with projects that support my Police and Crime Plan – including proposals that address emerging trends such as County Lines and Knife Crime.

“It has been an extraordinarily challenging year for us all but I am delighted that my Your Community Your Choice fund continues to support community projects like this one across North Wales for an eighth year.

“This unique fund allows our communities to decide which projects should get financial support through our on-line voting system and ensure that North Wales Police is paying specific attention to those points which have been identified as crucial by the public, me and indeed by the force itself.

“I aim to ensure that a clear focus continues around county lines crimes – a particularly vicious form of criminality that exploits the young and vulnerable and I am delighted to see that a number of your applications aim to support our young people.