A historic North Wales village is on course to be the greenest in Wales after ditching fossil fuels for renewable energy at the local community centre, a former water mill.

Abergwyngregyn was the home of the last Welsh Prince of Wales, Llywelyn ap Gruffudd, who led a revolt against the English but over 700 years later it’s at the forefront of a green revolution.

The village’s old three-storey water mill is powered by an air source heating system which keeps the ground floor café warm as toast and also heats the second floor, home to a number of village organisations, and the upper level where the snooker club have two tables.

It has been installed by Denbigh-based Hafod Renewables whose Managing Director David Jones said: “It’s a big area to heat but air-source works perfectly here because the system provides a constant comfortable heat for the building all year round.

“Its reliability and the hassle-free controls are an added help for the users of the building too.

“The air source heating made the gas system redundant which means the building produces no emissions so it’s safer, cleaner and easier to manage as they only have one utility to look after.”

The gas supply has been disconnected which saves the centre over £100 a year in standing charges and the community will also receive £600 a year for 20 years from the Renewable Heating Initiative which will pay for the scheme.

David Jones added: “Abergwyngregyn is really leading the way with this approach as the UK Government shifts towards renewable fuels.

“From 2025 the Government has said gas boilers will be banned in new homes and renewables, such as air and ground source and solar, will be the fuels of choice.

“It’s a remarkable village and they have big plans to become even greener in future with grants for local people to fit their own renewable systems.”

It adds to the green credentials of Abergwyngregyn which already boasts a £1.3 million hydro-electric plant on the Afon Anafon which generates £200,000 from the National Grid which pays off the scheme’s loan repayments, pays rent to the landowners, provides social dividends to shareholders and provides £30,000 a year for the local community.

The village is best known for the spectacular 120-foot Aber Falls, one of the highest waterfalls in Wales, but Jacqui Bugden, one of the Directors of ARC, the Abergwyngregyn Regeneration Company, believes its green credentials are also putting it on the map.

She said: “ARC manages the old mill as a community centre and also two car parks because the waterfall attracts 100,000 visitors a year which keeps the café busy and the centre is very well used by local organisations from the tai chi group to the quilters, crafters and gardeners.

“We wanted to make the building more sustainable and a survey showed the best option was to get rid of the old gas boiler and install air source and we were impressed by Hafod Renewables who asked the right questions and came up with the best solution.

“We set up Dwr Anafon to distribute the disposable profits from the hydro scheme and there are grants for homes in the village to make them more energy efficient.

“We’re also looking at the hydro scheme because at the moment we can sell our electricity to the National Grid but we are planning a community local energy scheme that would enable local homes to get cheap electricity while the hydro is running.”

David Jones said: “Abergwyngregyn is in a narrow valley which makes solar systems uneconomic but air source is a perfect solution and the sophisticated systems available now can easily be fitted to old properties.

“They don’t have much visual impact either and they can easily generate enough power to provide a homewith a fully independent heating system that can easily give room temperatures up to 21C and heat water to 65C.

“It operates like a fridge in reverse but the coolant in it has a boiling point of -40C so as long as it’s warmer than that then it can extract energy from the air it sucks in and heat the property.”

Hafod have installed over 70 air source heat pumps in the past 12 months including one to provide underfloor heating to keep the abandoned dogs warm at the North Clwyd Animal Rescue charity’s kennels near Holywell.

The company, which recently moved to their own carbon-free headquarters at Tremeirchion in the Vale of Clwyd, now employs 11 staff and has become a key player in North Wales in the installation of solar and non-solar systems. 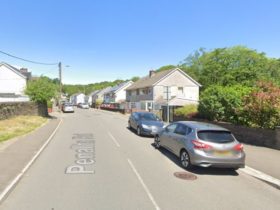