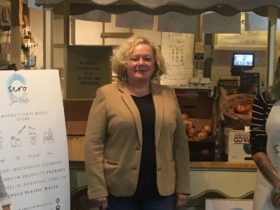 The saying goes that everybody needs good neighbours and at Llanmoor Homes, Waterloo Gardens development in Newport, resident Vincenza Antonelli is certainly making sure that’s lived up to – [aoa id=”1″]

taking care of the on-site team with her regular culinary treats.

Vincenza – who moved to the popular development last year with husband Giovanni – has become synonymous with her home-cooked offerings, delivering freshly cooked meals to the sales office, and fellow neighbours, often on a daily basis!

Vincenza relocated to Wales at the age of 18 from her hometown of Sora just outside Rome and developed her love of cooking while watching her mother rustle up hearty meals for the family.

Now putting her skills to good use in her new Llanmoor home, the talented cook said:

“I was passing the sales office one day and got chatting to Angie who is the sales negotiator for the development – we had a lovely chat and I started popping in with an espresso for her every now and then.

“We’ve become firm friends both with Angie and Mark the site manager and following on from that, I started dropping off some of my favourite dishes as I was cooking them – Angie and Mark seemed to appreciate it so much that I’ve kept on doing it and it’s now a regular thing!

“It’s often a lasagne, bolognese or home-made pizza and the joy of living here is that with our lovely big garden, my husband has been able to create an allotment so a lot of what I’m cooking is using vegetables and ingredients grown in our very own space.

“We’re in a fantastic location – quiet but close to all local amenities; with great neighbours and most importantly, a nice big kitchen in which to cook and keep everyone fed and fortified.”

“Since Vincenza has moved to Waterloo Gardens, I literally feel as if I have my own personal chef. She really looks after us – an absolutely fantastic cook and now friend, and I know each night when I go home, my husband is wondering what tasty treat I’ll be bringing with me”.