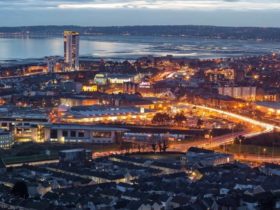 Residents living near Brombil Reservoir in Margam, Port Talbot, have been suffering from a huge rise in the reservoir’s popularity largely due to people seeking to post photographs of it on social media.

It has led to frequent blocked access and severe parking problems for local residents and access for any emergency vehicles has often become blocked. There are also issues involving littering and dog mess.

As a result, Neath Port Talbot Council is politely requesting that recreational visitors stay away from the reservoir while a solution to the parking and other problems is worked on.

Police, councillors and others have already held meetings to discuss the issue and it was felt that while the discussions continue, an appeal to would be visitors to refrain from going there – accompanied by an explanation of the difficulties being faced by local people – could go some way towards easing the problem.

Some traffic control orders (double yellow lines) have been put in place at Brombil but these have, in some instances, been ignored and it has also had the effect of moving the parking issues to adjacent areas.

In the meantime, Neath Port Talbot Council is requesting that people who have no essential need to go the reservoir would refrain from visiting.