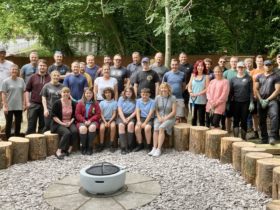 The couple were both awarded honorary degrees to recognise their achievements in not only their individual disciplines but also in raising the profile of Welsh sport across the globe.

George North was just 18 years, 214 days when he first represented Wales in their match against South Africa in 2010. He scored two tries and became the youngest Welsh player ever to score a try on his debut.

Currently playing for Ospreys, winger George was the youngest player to win 100 caps for Wales and has holds the record for the most tries in international rugby for an active player.

His wife’s achievements are equally as remarkable since she was spotted for the Welsh Talent Team and became a member of British Cycling’s Olympic Podium Programme.

When she was 18 in 2009, she claimed two golds and a silver at both the European Track Championships and the UCI Junior Track Cycling World Championships, where she set a new world record for the flying 200 metres.

Representing Wales at the 2010 Commonwealth Games, she won a bronze medal in the 500m TT track race and a silver in the sprint track race.  In 2013 Becky claimed her first world gold medal at the 2013 UCI Championships and went on to win silver medals in both the keirin and the sprint at the 2016 Rio Summer Olympics.

Becky retired in 2017 and since marrying in 2019, the couple have become parents of two young sons. They are now the owners of Ground Bakery in Pontcanna and Penarth.

Welsh-speaker George, who was brought up in Anglesey, and Becky, from Abergavenny, said they were delighted to been honoured together by the University.

He said: “It is a real honour to be presented with this award from Swansea University, especially as it is a Welsh University with such strong connections to rugby, and The Ospreys in particular.  I hope to have the opportunity of working with the University in some capacity in the future.  Diolch yn fawr iawn.”

Becky added: “I am really honoured to be recognised by Swansea University in this way.  It means a lot to receive an honorary degree from Swansea, as not only is it a Welsh University but one with such a strong sporting tradition.  It has been really special to share today with my husband, and we would both like to thank the University for this opportunity.”

Swansea University Vice-Chancellor Professor Paul Boyle said: “I would like to thank George and Becky for joining the Swansea family and becoming the first married couple we have honoured in this way.”

The University’s four days of graduations, held for the first time at the new Swansea Arena, are celebrating the achievements of the Class of 2020 whose original ceremonies had to be postponed due to Covid.