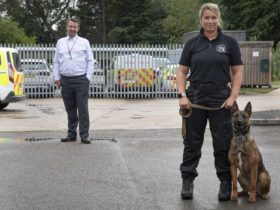 A woman who booked flights and accommodation to help her killer boyfriend evade police has been sentenced to 27 months imprisonment.

Aseel Arar, 35, from Birmingham, was found guilty of assisting an offender following an earlier trial at Cardiff Crown Court. She was today handed a 27-month jail term for her involvement following the death of Fahad Nur in Cardiff on June 2 last year.

Her boyfriend Abdulgalil Aldobhani, 23, Mustafa Aldobhani, 22, and Shafique Shaddad, 25, have each begun life sentences after being convicted of Fahad’s murder.

Senior Investigating Officer Mark O’Shea said: “Aseel Arar acted out of misguided loyalty to a loved one, who she knew or had reason to believe had committed a heinous crime.

“In doing so, she also committed a serious offence and has now also found herself behind bars for a significant time. I hope the length of the sentence imposed acts as a deterrent to others who consider assisting those involved in knife crime.

“This tragic case yet again highlights the devastating and far-reaching consequences of knife crime, and I cannot stress enough the importance of loved ones reporting their concerns if they suspect someone they know is carrying a knife or involved in knife crime.

“Speaking out could, quite simply, save a life.”