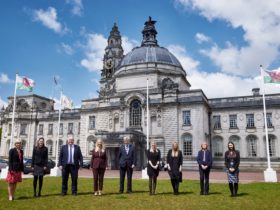 The prestigious annual awards ceremony, held virtually this year, showcased 35 finalists who have excelled on the Welsh Government’s Apprenticeship and Traineeship Programmes and gone the extra mile to achieve success during these unprecedented times.

The Apprenticeship Awards Cymru are jointly organised by the Welsh Government and the National Training Federation for Wales (NTfW), with Openreach, the UK’s digital network business and passionate supporter of apprenticeships, the headline sponsor.

Congratulating the winners, Minister for the Economy, Vaughan Gething, said: : “Our award winners have excelled via the Welsh Government’s Apprenticeship and Traineeship programmes and gone the extra mile to achieve success during unprecedented and extremely challenging times.

“That’s why the new Welsh Government has committed to creating a further 125,000 Apprenticeship places over the next five years. We are a small country, but we have big ambitions, and our aim is to create a culture in Wales where recruiting an apprentice becomes the norm for employers.”

Compact Orbital Gears from Rhayader, a leading name in specialist gear transmissions for more than 50 years, won the Small Employer of the Year Award, having reaped the benefits of using apprenticeships to develop a multi-skilled and flexible workforce.

A focus on growing its own pool of skilled engineers in Mid Wales is paying off for the company, which has 43 employees, when there is a UK shortage.

The company has three apprentices and five other young employees working towards Further Education qualifications, delivered by Myrick Training and NPTC Newtown Campus.

William Davies, who saved his employer £20,000 a year by automating a product assembly system, was named Apprentice of the Year.

William, 20, from Llwydcoed, Aberdare, works for Kautex Textron CVS Ltd in Hengoed, also commissioned a new Rapid Prototyping 3D printer to assist in autonomous vehicle systems development, implemented Health and Safety and productivity improvements and managed a project to renovate and ensure a canteen is Covid-secure.

He achieved an Apprenticeship in Engineering Manufacture (Engineering Technical Support) six months ahead of schedule at Coleg y Cymoedd where he attained two awards. He is now working towards a Level 4 HNC in Mechanical Engineering at Bridgend College.

Karen Richards from ACT in  Cardiff, whose Accountancy Apprentices have achieved a pass rate of 86% – well above the national average – won the Work-based Learning Tutor of the Year.

Karen, 54, from Blackwood, uses her experience to teach Advanced Diploma and Professional Diplomas in Accounting in an engaging and fun way. In addition to teaching her own Level 4 learners at ACT, she also provides coaching support to other learning providers when their learners are struggling.

Jessica Apps and Thibaud Gailliard, winners of the Traineeship Learner of the Year for Engagement and Level 1 respectively, both had inspiring stories to tell.

Jessica, 19, moved from Botswana to begin a new life in Blaenavon with her mum and younger sister in November 2019. Now she is described as a “superb role model” and is setting her sights on a teaching career.

A Traineeship Creative Engagement Programme with Sgiliau Cyf developed Jessica’s passion for photography and creative writing. She is now studying ‘A’ levels at Coleg Gwent with the ultimate goal of becoming a teacher.

Thibaud, 21, from Ebbw Vale, could speak little English and had no formal qualifications or previous work experience when he arrived in Wales as a shy 16-year-old, following the loss of his mother to cancer.

Now Thibaud is fluent in English and his learning journey was described as “incredible”. He achieved a Traineeship Engagement Programme in Creative Media and a Foundation Apprenticeship in IT delivered by Risca-based training provider Sgiliau Cyf who now employ him as lead administrator

Aspire Blaenau Gwent and Merthyr Tydfil collected the Large Employer of the Year Award for its Shared Apprenticeship Programme, which has plugged a manufacturing skills gap whilst tackling high unemployment across two local authorities.

The programme benefits companies who share learners to achieve units towards their apprenticeship. Aspire is now working with both Coleg y Cymoedd, who link with Coleg Gwent and Coleg Merthyr Tydfil to foster the next generation of skilled workers through apprenticeships.

Named Medium Employer of the Year, Convey Law from Newport is targeting 50% growth in 2021 fuelled by an innovative in-house Apprenticeship Programme for conveyancers that managing director, Lloyd Davies, describes as “life-changing”.

Through a funding partnership with Cardiff and Vale College, the company created The Conveyancing Academy in 2014 which has increased conveyancers from 25 in 2019 to 55 in 2020. Apprentices doubled from 15 to 30 in a year.

Versatility has been the key to the success of Macro Employer of the Year Award winner Rhondda Cynon Taf Council’s Apprenticeship Programme, which has thrived despite the global pandemic.

The council’s 80 apprentices were set up at home while virtual learning and extensions to courses and deadlines were implemented. Apprentices have been deployed to support essential community services, have worked with the NHS on coronavirus shielding data and have distributed food parcels.

After working within the performing arts sector for several years in London, Higher Apprentice of the Year Award winner Natalie Morgan, 33, from Penarth, returned to Wales and secured a job with Welsh Gymnastics.

She completed a Higher Apprenticeship (Level 4) in Leadership and Management with Cardiff-based Portal Training and has now progressed to Level 5.

Using the skills she learnt during her apprenticeship, Natalie led a successful outreach project which engaged young girls and women from the Black, Asian and Minority Ethnic community in gymnastics. Launched with 11 girls, the Cardiff club grew to more than 130 in just 18 months.

The other award winners were: Foundation Apprentice of the Year, Bethany Mason, 21, from Llantrisant who works as a bereavement services officer for Rhondda Cynon Taf County Borough Council. Tomorrow’s Talent,  Sophie Williams, 24, from Hirwaun, who is regional recruitment officer with Fostering RCT. Work-based Assessor of the Year, Matt Redd, 41, from Cardiff, who works for Sgil Cymru and runs a production company, Standoff Pictures Ltd. 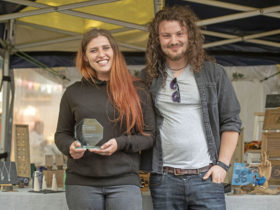 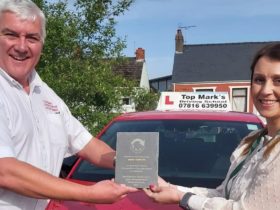 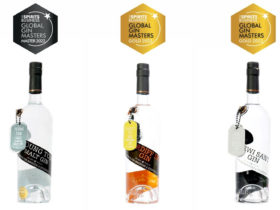