A new skate park and play park are being developed in Penllwyn, along with improvements to the surrounding area.

The improvements are being funded by Caerphilly County Borough Council’s Welsh Housing Quality Standard (WHQS) environmental improvement programme. Over the term of the WHQS programme over £260 million will have been invested into the homes of council tenants and their local communities.

Approximately £109k worth of work has already been carried in works to the surrounding area, with a kerb reduction and parking in Brynteg Avenue, parking to the rear of the shops and formalisation of the parking area on Fleur de Lys Avenue.

There are approximately £227k worth of projects approved and awaiting completion. This will be for the remodelling of the area by the shops, and an increased parking provision in St Sannans and Penymead.

All improvements have been decided through consultation with local residents, Penllwyn Primary School and Penllwyn Community Partnership.

Cllr Lisa Phipps, the council’s Cabinet Member for Homes and Places, said “A healthy and active lifestyle is important for all residents in the borough, so I am very pleased to see that work on the exciting new skate park and play equipment in Penllwyn has started. Projects like this will help with improving healthy social integration amongst our young and build community relationships, creating communities where residents feel proud to live in. I look forward to visiting again when it’s completed.”

Anna Lewis, Chair of Penllwyn Community Partnership, added: “The news that works have begun on the skate park and play park is fantastic for the children of the Penllwyn community. The Penllwyn Community Partnership has campaigned for this for years, so it is great to be able to see it come to fruition as part of Caerphilly council’s WHQS Environmental Programme. Thank you to all those involved.” 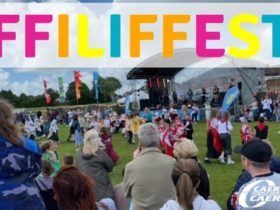