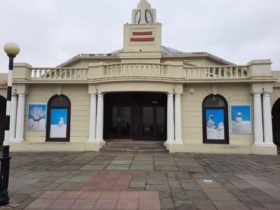 The latest developments on the multi-million pound project include the laying of concrete for the new backstage platform lift, which will ensure better access for bigger sets and stage equipment.

Previously, equipment had to be hauled up the main steps of the building and through the hall. It will also mean evenings won’t need to be cut short by stage crew having to remove sets and equipment through audience areas after the show.

On the roof, the cupolas, which form part of a traditional ventilation system, have been restored and weatherproofed.

The iconic clock has been taken apart and its mechanism removed to provide unhindered access for the structural works needed to the tower, and to keep it safe during the process.

This has been carried out by renowned clockmaker Smith of Derby, which has looked after the clock for many years. It previously restored the clock at St David’s Cathedral as well as building and looking after the clocks of St Paul’s Cathedral and Shanghai Customs House, which is the largest clock in Asia.

Bridgend County Borough Council is working in partnership with Awen Cultural Trust and a number of key funders on the project which is the biggest investment in arts and cultural in Maesteg in generations.

The £7.9m project will see the Grade II-listed building returned to its former glory and enhanced with a new glass atrium, studio theatre and cinema space, café and mezzanine bar, heritage centre and modern library. It is scheduled to reopen in spring 2022.