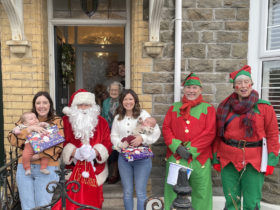 Three thrill-seeking intellectual property experts have abseiled 80 metres down one of the UK’s tallest sculptures to generate funds for people with brain injuries.

The daring team, from leading intellectual property firm Wynne-Jones IP, have taken on the ArcelorMittal Orbit in Stratford, London.

Recognised as the UK’s highest freefall abseil standing at 262 feet high, the sculpture is taller than the Leaning Tower of Pisa, the Statue of Liberty, and Big Ben.

Taking on the 80 metre abseil at the Queen Elizabeth Olympic Park were paralegals Alan Hammler and Hannah Champion, along with senior marketing executive Amy Kasprzyca.

Thanks to their daring efforts the trio helped raise over £500 for their charity of the year Headway, which works to improve the lives of people who have suffered a traumatic brain injury.

Miss Kasprzyca said the challenge was one of the most “thrilling and nerve-wracking experiences of her life”.

“To say I was nervous would be an understatement, however this was a challenge that I absolutely couldn’t pass on.

“On the day I was understandably nervous, and once I got to the top even more so. But once we began descending it was incredible! The view over London was amazing and it was so much fun.

“I’d absolutely recommend it to anyone who is considering it. What’s even better is that we managed to beat our fundraising target for Headway, which does such fantastic work.

“It was one of the most thrilling and nerve-wracking experiences ever and I’ll never forget it.”

The team smashed their original fundraising target of £570, This takes their overall fundraising total since they began supporting the charity in 2016 to over £2,500.

Intellectual property staff from the firm, which advises on all aspects of IP rights, strategy and renewals, have previously undertaken activities including scaling the roof of the O2 Arena in London for the charity.

Miss Kasprzyca added: “Our team loved every minute of this abseil and can’t wait to throw themselves into the next daredevil challenge.”