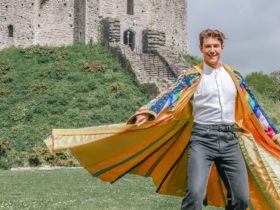 The UK’s largest animatronic T-Rex will be on display into Mermaid Quay until Sunday 23 February 2020.

Dubbed Quay-Rex, the 18 metre long and 5 metre tall life-like dinosaur features a moving head, tail, eyes and arms as well as a terrifying roar.  It fills up most of Tacoma Square – in the heart of Mermaid Quay – and its head is as high as the terrace level.

Mermaid Quay centre manager Simon Whiting said: “We’re really looking forward to playing host to the enormous Quay-Rex – it promises to be a huge draw, attracting visitors not just from the Cardiff area, but way beyond, as well as possibly scaring and surprising a few passers-by.  Don’t forget your phones and cameras, you won’t want to miss this!“Following a series of really successful LEGO brick installations in Tacoma Square, we wanted to do something different this half term and Quay-Rex definitely fits the bill!   But LEGO brick lovers shouldn’t despair, we’re planning another great installation at Mermaid Quay later in the year.”

In addition to Quay-Rex there will be an dinosaur ride for kids; T-Rex merchandise on sale and other fun dino-themed competitions and activities.

With all the restaurants, cafés and bars at Mermaid Quay to enjoy plus Techniquest and the Wales Millennium Centre nearby – it all adds up to a dino-mite day out.

Quay-Rex will be free to view.

Plus, there’s fun things to do for FREE: