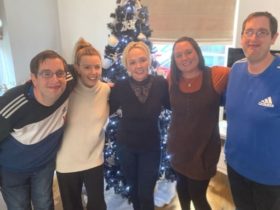 Two local creative talents, George McDonagh and Mohamad Miah, have been recruited to work on StoryTrails, a unique immersive storytelling experience coming to Newport, as part of UNBOXED: Creativity in the UK, a ground-breaking nationwide celebration of creativity in 2022.

StoryTrails allows local people to experience their town in a completely new way through the magic of augmented and virtual reality. People will be able to use this new technology to travel back in time, experiencing untold local histories from Newport. These stories will be brought to life in the places where they happened, reanimating public spaces and creating a free, entertaining and playful family-friendly experience. StoryTrails will visit just 15 locations across the UK, including Newport on 13-14 August.  Led by the National Centre for Immersive Storytelling: StoryFutures Academy, the StoryTrails project has recruited the best and brightest creative talent from the local area to showcase the stories of this community as part of the UK’s largest ever immersive storytelling project.

Born and bred in Newport, George McDonagh will be making an interactive immersive map of the city he grew up in. George works on the award winning podcast Power Corrupts, which has been downloaded roughly 2.5 million times by listeners in more than 100 countries. He loves Newport’s “rich and varied past…from music to sport to revolution, the place has shaped South Wales for generations.” He believes StoryTrails has given him the chance to do just that, stating “I’m always wanting to bring to life a place that I feel has been under-told and under-appreciated. This project would help bring that desire to life.”

Joining George will be Mohammad Miah, who lives and works in Newport and has been recruited to make an augmented reality story trail around the city. Mohammad has produced 5 podcast series, as well as a documentary which tracked the evolution of humanity. He’s proud of Newport’s people, explaining that they’re “never boring, and the potential I’ve seen here is phenomenal.” He was particularly inspired by John Frost, a politician and local hero, saying “His name ricochets across Newport’s history and I would love to bring his spirit, attitude and focus to a new generation.”

George and Mohammad are part of a team of 50 emerging creative media practitioners who will participate in the StoryTrails project, telling the stories of 15 communities through state-of-the-art immersive technologies in new and surprising ways. These include 17 practitioners creating augmented reality (AR) story trails across city centres and 15 building immersive installations which will map the emotional geography of a location. In addition, nine creatives will develop the virtual reality (VR) experiences and nine will take on a professional placement in one of the StoryTrails partner organisations.

The practitioners will be working with unprecedented access to archive material from the BFI, national and regional film archives across the UK as well as the BBC, with the goal of reimagining the UK’s screen heritage for the future. Full training in immersive technologies, such as augmented reality and 3Dscanning, has been provided. They will be supported throughout their journey by experienced producers.

On 13-14 August, audiences will be guided through an immersive tour of Newport as they explore stories across virtual and augmented reality and via a series of installations created by George and Mohammad.

Outside Newport’s Central Library, participants will enter the virtual story portal to begin the StoryTrails experience, guided by a free mobile AR app and local performers. Using stunning AR experiences that remix the BFI and BBC archive, local people will experience history where it actually happened, revitalising the streets upon which they stand with new voices and untold stories of the past. Inside the library, participants will be immersed in a virtual map of their town that will be made up of 3D models and audio stories captured on location. They will also have the opportunity to explore further stories via bespoke virtual reality experiences.

Professor James Bennett, Director of StoryFutures and StoryTrails, said: “StoryTrails is a massively ambitious project as we travel across the UK to discover unknown, surprising and intriguing stories from local communities. We’re excited to work with local creative talent like George and Mohammad to uncover and bring these hidden histories to life, creating a new sense of belonging and immersing audiences in an amazing new way to see themselves, their communities, their towns and country.”