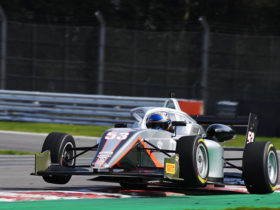 Following a successful test in South Wales on Monday, Tom Cave says he feels ready for his biggest challenge of the year, the Dayinsure Wales Rally GB – Britain’s round of the FIA World Rally Championship.
[aoa id=”1″]

Monday’s test saw the 26-year old from Aberdovey back behind the wheel of a Hyundai i20 R5 for the first time since finishing third in the WRC2 category on the Neste Rally Finland in July last year.

It didn’t take long for Tom to re-acclimatise himself to the car and, with just a few tweaks made by the Philip Case Rally Sport crew, he was quickly up to competitive pace.

“It was great to back in a Hyundai again,” said Tom. “The one I’m using on Rally GB is a 2018 model and it felt even better than the cars I drove last year in the British Rally Championship and Finland. I was very happy with the test. I came away feeling comfortable in the car and confident we can fight for class honours.”

In addition to setting up the car, Monday was also an opportunity for Tom to take some of his sponsors, including Trailhead Fine Foods of Welshpool, for a passenger ride they’ll never forget!

In the warm autumn sunshine, guests were treated to a high speed run through the test stage and, by the look on their faces when they got out of the car, without exception all of them said they were thrilled by the experience.

“It was great to be able to offer our sponsors the opportunity to sit alongside and find out what it’s like to drive through a forest stage at speed,” said Tom. “Many of them had never been in a rally car before and to say that they were blown away I think would be an understatement.

“Events like this are so important, as the support from these companies and individuals has enabled me to take part in this year’s Wales Rally GB – and for that, I’m extremely grateful.

“Because I haven’t entered as many rallies as I would normally this year, it would be fair to say that I’m looking forward to this event more than ever. Living in Mid Wales, I feel at home on the stages; the car feels great and James (co-driver) and I are as ready as we can be. I can’t wait to get started!”

The Dayinsure Wales Rally GB gets underway on this evening from the Deeside service park, before the Visit Conwy Tir Prince spectator stage near Rhyl. Friday features eight stages in North Wales, with Saturday comprising a further nine in North and Mid Wales, one of which runs just a few miles from where Tom lives.

Sunday is the final day, when the route heads back to north Wales for four stages in forests directly south of Llandudno followed by the fifth and final stage around the Great Orme headland with the flying finish along the seafront.