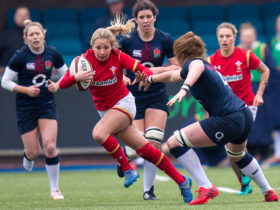 112 Talented Athletes across Cardiff to benefit from £44,800 fund

Fresh from the team’s successful run in the Rugby World Cup in Japan where they reached the semi-final, Alun Wyn was presented with the award tonight at the Wales Sports Award after topping the public vote.

Sabrina Fortune and Jade Jones were announced in second and third place respectively.

Alun Wyn Jones led Wales to a Grand Slam in March and became Wales’ most capped ever player during the World Cup in Japan, winning praise from some of rugby’s greats. And tonight his contribution to Welsh sport was acknowledged as he won the public vote and accepted his award at the Wales Sport Awards held at the Celtic Manor Resort in Newport.

The awards honoured sporting heroes from all over Wales. Jointly held by BBC Cymru Wales and Sport Wales, it celebrates the best of Welsh sport from grassroots to elite.

Also tonight, boxer Joe Calzaghe was presented with a lifetime achievement award. The unbeaten former super-middleweight champion’s contribution was honoured as he was handed the award by last year’s winner Baroness Tanni Grey-Thompson.

The other winners on the night were:

Delwyn Derrick was awarded the Unsung Hero award for his work supporting inclusion, using sport to bring people from different backgrounds together through football.

Team of the Year went to the Wales Rugby Team following their successful run in the Rugby World Cup in Japan earlier this year which took them all the way to the semi-finals.

The team’s coach Warren Gatland took Coach of the Year. Gatland has recently finished his glittering run as Wales coach. Since he became coach in 2007, Wales have won four Six Nations titles, including three Grand Slams, and reached the semi-final of the 2019 and 2011 World Cup.

The Great Sport Story of the Year 2019 went to the Homeless World Cup which was held in Cardiff over the summer. The organisers, backed by Hollywood actor Michael Sheen, saw more than 500 players from nearly 50 nations come together for the 7-day festival of football.

Goodgym in Cardiff and the Vale took the Getting Wales Active Award 2019. This running club helps tackle social issues, such as loneliness, by completing ‘good deeds’ during their runs, combining getting fit with helping their local community.

The new Coaching Chain of the Year award recognised the achievements of Olympic sailor Hannah Mills. This award celebrates the people who have helped to shape her sporting journey over the years, from community and elite settings.

“Congratulations to everyone who has received an award tonight. Sport is such an integral part of the fabric of our communities, and it’s wonderful to be able to celebrate the athletes and organisers on all levels that make such a contribution to Welsh sport, from the grassroots to the elite.”

“What a privilege to be in the company of such inspiring and worthy winners of these prestigious awards.   From stories such as Mia Lloyd’s heart-warming journey where sport has transformed her life, to the success seen on the world stage by stars such as Alun Wyn Jones and Hannah Mills.

“It’s clear that sport is thriving here in Wales, and I look forward to seeing more people enjoy the benefits of sport in 2020.”