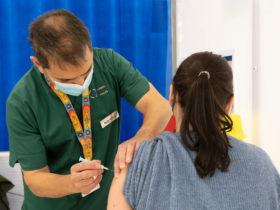 A young woman who was left devastated after her sister was killed by a drunk driver has got her life back on track and is training for a degree in nursing thanks to a pioneering pilot scheme at a care organisation.

Amy Rowlands, 27, left Ysgol Friars in Bangor without completing her A-levels because she was so distraught by the fatal accident that claimed her sister’s life.

After spending several years caring for her grandparents, she got a job at Pendine Park’s Bryn Seiont Newydd care home in Caernarfon – and hasn’t looked back since.

Amy signed up for the Open University nursing degree course, after gaining a clutch of NVQs and training as a clinical care practitioner.

She said: “The new role of clinical care practitioner was brought in as guidelines changed as to who could give medication in care homes. The training involved learning about wound management, nutrition and hydration, medication management and administration and other topics. I really enjoyed the training.

“I’m really enjoying the Open University course and look forward to getting my degree in four years’ time. My week is basically 16 hours of placement work which is all paid, an eight hour study day at home which is also paid and then a 12 hour shift doing my normal work. I then have three days off.

“It works brilliantly and I’m learning and earning and getting the best of both worlds. Pendine Park as a care organisation just have it right.

“Any new regulation that comes in affecting the care sector and staff know about it instantly and training is put in place. It’s part of the Pendine Park ethos.”

Amy says she chose a career in care after spending time caring for her grandmother and grandfather.

She said: “I was at a Ysgol Friars, Bangor doing my GCSE’s and had my sights set on university once I’d got my A-levels done. I hadn’t really considered a career or what I wanted to do.

“I’m one of identical triplets and my sister was killed by a drunk driver just as I was about to take my GCSEs. It was horrendous. My sister was one of three that died and another girl was paralysed from the neck down.

“The driver, who they were in the car with, survived and was jailed. But when it came to my GCSEs I managed to do them but it was a struggle as I was consumed by grief.

“I then started my A-levels but after a year had to admit it wasn’t working. I gave up as my head just wasn’t right and I simply couldn’t cope.

“I’d looked after my nan, taking her for dialysis three times a week and just sitting with her I then knew a career in care was what I wanted to do.

“I also looked after my grandfather who was himself a mental health nurse at Denbigh Hospital back in the day. He moved into social care and retired as a Social Services principal officer.

“Working at Bryn Seiont is my perfect job and I love being part of the team. I’m just grateful to Pendine for giving me the opportunity.”

“Care home nursing is very different to hospital nursing. It’s a varied role and we have to be autonomous. There isn’t a doctor around every corner so you need to be up for the challenge and ready to deal with physical, physiological or psychiatric problems. We also take a holistic approach when we can.”

She said: “Professional development within the social care sector replicates the requirements of those within the NHS and social care provides are eager to support this and engage with their nurses to ensure this is achieved.

“Our clinical care practitioners provide invaluable support for the trained nurses who themselves mastermind care planning and provide mentorship for the trainee nurses taking part in the pilot programme.”