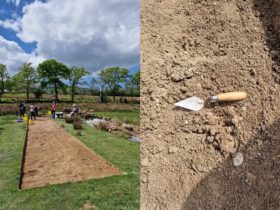 The University of Wales Trinity Saint David was honoured to host the third Annual Buddhist and Ancestral Remembrance ceremonies.

The ceremonies were held on the University’s Lampeter campus, and were hosted by the Academy of Sinology. Staff and students from across the University attended the two-day event which attracted Buddhist followers from all over the world.

“As part of its strategy, the University aims to take the best of Wales to the World and bring the best of the World to Wales and hosting international events such as this contributes to that very important mission. The University is delighted to have hosted the Ancestral Remembrance Ceremony at its campus in Lampeter to offer a rare opportunity to witness and participate in an ancient tradition of China. The Ceremony also attracted many visitors from overseas and in doing so provided a wonderful occasion to make new friends and forge links across continents and cultures. I very much look forward to the Ceremony returning to Lampeter again next year.”

The Ceremonies form a central part of Buddhist meditation, worship and practice. Together they offer a fascinating insight into one of the World’s great religious and spiritual traditions as well as offering a culturally rich experience and engagement for all within the community.

The ceremony began with an address by the Venerable Master Chin Kung, founder and spiritual leader to a global network of over 100 Buddhist societies, foundations and learning centres, that together represent an international following of over 300 million people. The Venerable Master was conferred the award of an Honorary Doctorate by His Royal Highness, The Prince of Wales, Royal Patron of the University of Wales Trinity Saint David, in 2016.

Attendees were also invited to take part in a special Chinese food bar available serving lunches for all coming to one of the services.

The Academy of Sinology was established in July 2016 as a joint institution between the Chin Kung Multicultural Educational Foundation and the University of Wales Trinity Saint David, marking the beginning of a new era in the studies of ancient Chinese culture, values and ethics.

The purpose of the Academy is, through education, instruction and enlightenment, to reintroduce ancient heritage and culture to the international community, at a moment when so much change and chaos in the world undermines people’s faith and belief in social harmony, mutual respect and peace.