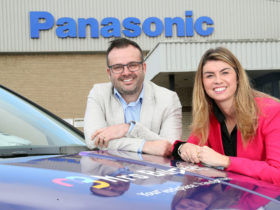 British athlete Derek Redmond – best known for his heroic finish at the 1992 Olympic Games in Barcelona – has been confirmed as the keynote speaker at an inaugural business expo in Newport next month.

Redmond, who hobbled to the finish line in the 400m sprint after tearing a hamstring, is to open the Business Growth Expo at the Coldra Court Hotel. Now one of the world’s most popular and sought-after speakers, Redmond will speak at the event with a motivational seminar titled ‘Sport is a business and business is a sport’, encompassing success on and off the track.

During his career, Redmond held the British record for the 400m sprint and won gold medals in the 4×400 metres relay at the World Championships, European Championships and Commonwealth Games. In Barcelona, with his father’s arms around him, Redmond limped around the track to a standing ovation, later saying: “I don’t like to give up at anything.” The footage of those heartbreaking five minutes is now world-famous and has been used in inspirational videos by Nike, Visa and the International Olympic Committee.

The expo is run in partnership with Spotlight Newport and is expected to attract hundreds of visitors from Newport, Cardiff and the south west of England. More than 50 businesses will exhibit, with only one stand per business category in order to ‘lock out’ competitors. Stand holders confirmed to date include United Commercial, The HR Department, Excellence IT, Chatterbox Communications, Minuteman Press Newport, Cheesecake Recruitment, Robertsons Solicitors, Thomas International, South Wales Chamber of Commerce, The Celtic Manor and AVA Security.

The expo also includes a ticket-only networking breakfast from 8.30am, as well as a number of ‘insight’ seminars throughout the day on topics including ‘The power of referrals’ and ‘The benefits of using the Welsh language in your business’.

Since retiring from athletics, Redmond has played basketball for England and professionally for the Birmingham Bullets, as well as competitive rugby union for Coventry RFC and Stow RFC. He is also a respected coach and advisor for international athletes, as well as an associate of Thomas Sports, which undertakes psychological profiling for athletes and businesses in recruitment matchmaking.

“To be a true champion you need to be physically strong but even more importantly you need to be mentally strong. My character today as a businessman is because of the experience I had as an athlete. The mindset of a successful sportsperson is no different than that of a successful businessperson. In both sport and business you have to be focused, disciplined, committed and passionate, otherwise you won’t succeed. Sport has given me the traits and characteristics to help me in business.”

“We are excited to announce that Derek Redmond will be speaking at our expo, and that we are able to host this event in Newport this year.  We have had so much interest in stands from businesses in the area and the number of visitor tickets booked through Eventbrite is increasing daily, so it is set to be an amazing first event for Spotlight Newport! We have a limited number of stands still available and would love to speak with an accountancy firm and an insurance broker in particular about exhibiting.”

The Business Growth Expo takes place on Friday, September 28 between 10am and 3pm, with breakfast networking before the event from 8.30am. Tickets for the day and for the networking breakfast can be purchased via Eventbrite. Stands cost from £150, which includes a ticket to the networking breakfast. For more details and to book your stand, contact Kate on 07908 353 029 or email [email protected].