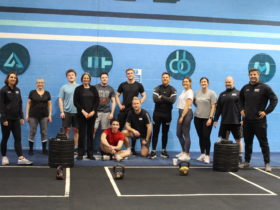 [aoa id=”1″]The investment has enabled Cardiff-based ie ie productions to expand by recruiting two new freelance drama, and an additional factual development producer. The appointments will work alongside the existing team of four to develop the company’s current slate of factual and drama productions.[/aoa]

Last year the company’s production ‘Richard and Jaco: Life with Autism’ received more than 20 million views on BBC Stories and won awards for Best Documentary and Best Factual Director at BAFTA Cymru. Since then, the company has developed an accelerating stream of work.

The new drama development roles will be split between two freelancers who will work on new projects and develop ideas, so the company has a continuous pipeline of projects to work on.

Stella Nwimo, an experienced London-based producer with an extensive film and TV background, and development executive Jessica Cobham-Dineen also based in London, have joined the ie ie productions team, working under Head of Drama, Alice Lusher. They will focus on female writers, directors and protagonists – with an eye on supporting emerging talent.

Founder and Managing Director, Catryn Ramasut, said: “We are delighted to be able to strengthen the ie ie bench with the addition of the talented Stella and Jessica. They not only share our company’s values, but their experience speaks for itself and they bring a wealth of knowledge and an expanded network with them.”

She added that, despite a move into the nations and regions by the major broadcasters, the TV and film world is still very much centred in London.

“We are a truly indigenous production company and we have our feet firmly rooted in Wales. It makes sense for us to be here, but it also makes business sense to have a presence in London.

“As a company we are committed to representing women in front of and behind the camera. Helping women to enter the TV and Film industry is a major challenge, especially if they are from under-represented groups and communities. Retaining them is even harder once they start having families.  If you are shooting a drama, you’re on set from 6 or 7 in the morning until 7 or 8 at night.

“ie ie productions is drawn to real-life stories because of our factual background. We’ve made a conscious decision to focus on female talent and female protagonists,” she added.

“Our factual department leans towards stories from the margins of society. The series that we’ve just completed for BBC Wales ‘Warriors: Our Homeless World Cup’ follows the Welsh women’s homeless football team as they train towards going to the Homeless World Cup in Mexico in 2018. It’s a story that humanises homelessness, filled with courageous and humorous characters, and a testament to female strength in the face of adversity,” Catryn said.

“The investment from the Development Bank of Wales gives us an opportunity to expand our team and reach, while maintaining a strong foothold in Wales. We are very pleased with the level of support we received, and the clear channels of communication which has made the whole process go smoothly.”

Joanna Thomas, Investment Executive at the Development Bank of Wales said: “Each company we work with is very different and every deal is bespoke. We invested in ie ie productions because we’re eager to support the growing creative industries in Wales and their passion for Welsh-made productions and putting Welsh TV and film on the map.

“Their work sheds light on diversity not only through the subject matter of their productions but within the company. The addition of two successful female producers based in London will strengthen the face of the company within the TV and film industry on a UK level.”