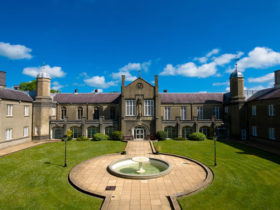 One of Wales’s most respected and long serving political figures has been appointed Cardiff University Chancellor.

Baroness Randerson takes over the role from the University’s former Chancellor and Nobel Prize winning scientist, Professor Sir Martin Evans who stood down from the post in 2017.

The role of Chancellor is the most senior of the University’s honorary roles and involves the key task of chairing University Court and presiding at all graduation ceremonies.

Baroness Randerson is no stranger to the University having served as a Pro-Chancellor since 2017. She was also awarded an Honorary Fellowship by the University in 2011 in recognition of her outstanding contribution to public life.

“I feel immensely honoured to have been asked to undertake this role, and I am especially aware of that I will follow in the footsteps of such distinguished predecessors.

“Cardiff University is very close to my heart. I have had close links with the university for many years. It is in the constituency I represented as an AM and many of its staff and students were constituents.

“Cardiff University is well established as one of the very best in the UK and it has a worldwide reputation for excellence, but constant hard work is needed to maintain and develop that reputation.

“I will take up this role at a time of immense challenge for all UK universities and I commit myself to do all I can to represent the University, its students and staff, to the best of my ability.“

Baroness Randerson is one of Wales’s longest serving politicians with a distinguished career of public service spanning four decades.

She was introduced in the House of Lords in 2011 and served as Parliamentary Under-Secretary of State at the Wales Office from 2012-2015, during which time she was also Lords Spokesperson for the Northern Ireland Office. She remains the Liberal Democrats principal spokesperson for Transport.

Prior to elevation to the Lords, Baroness Randerson served as Assembly Member for Cardiff Central for 1999 to 2011 during which time she was Minister for Culture, Sport and the Welsh Language (2000-2003) and Acting Welsh Deputy First Minister (2001-2002).

It followed an active career in local government as a Cardiff city councillor from 1983 to 2000. She was Leader of the Opposition on the City and County Council from 1995-1999.

Before entering public service, Baroness Randerson worked as a secondary school teacher (1970-1976) and as a lecturer at Coleg Glan Hafren (1976-1999).

Professor Stuart Palmer, Chair of Cardiff University’s Council said: “I am very much looking forward to working closely with Baroness Randerson over the coming years.

“I am thrilled she has agreed to take up the role.”