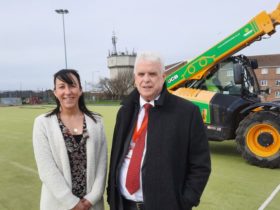 In a Ceremony held on 16 March, the British Empire Medal was awarded to Tony Hawkins, formerly of Llandysul. The medal was awarded for voluntary services to disabled people in Ceredigion.

The British Empire Medal was presented by Miss Sara Edwards, Her Majesty’s Lord Lieutenant of Dyfed.

“I am delighted to have received this great honour and to have shared the day with my family and friends who attended the ceremony”.

The British Empire Medal is awarded to people who have made sustained and high-impact work in their community.