According to the latest NatWest Wales PMI® data, private sector firms indicated a renewed rise in business activity in November, despite a further fall in new order inflows. The decrease in new business quickened and was modest overall. The sustained decline in client demand also led to a strong reduction in workforce numbers and a slump in business confidence midway through the fourth quarter.

Meanwhile, price pressures eased to the slowest since June 2016, whilst firms increased their charges at the quickest rate since April.

The headline Wales Business Activity Index – a seasonally adjusted index that measures the combined output of the manufacturing and service sectors – registered 50.8 in November, up from 49.3 in October, to signal a renewed rise in business activity. The increase in output contrasted with a marginal contraction seen across the UK as a whole, with some Welsh companies stating that growth was driven by the replenishment of stocks of finished goods.

November data signalled a fourth consecutive contraction in new business across the Welsh private sector. The fall in client demand was attributed to ongoing Brexit uncertainty and unfavourable economic conditions. The rate of decline was only marginal, but was faster than the UK average.

Private sector firms in Wales registered further decreases in employment and backlogs of work in November, reflecting the drop in new business and reduced pressure on capacity. Workforce numbers fell at a strong rate, albeit the slowest for three months, as firms reportedly did not replace voluntary leavers.

Meanwhile, outstanding business fell for a fourth successive month, with the rate of reduction accelerating to the fastest since June 2018.

Average cost burdens faced by private sector firms increased in November, albeit at the softest pace since mid-2016. Although many linked greater costs to higher raw material prices, others noted that reduced demand for inputs had led some suppliers to offer discounts.

At the same time, companies increased their selling prices at a solid rate that was the sharpest since April. Moreover, of the 12 monitored UK areas, Welsh firms recorded the fastest rise in output charges.

Output expectations remained positive in November, with firms across Wales still forecasting a rise in activity over the coming 12 months. That said, the degree of business confidence slumped to the weakest since March amid a sustained drop in new orders. The level of optimism was also below the UK average. 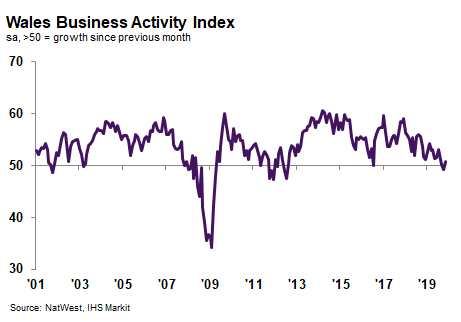 “Welsh firms signalled a renewed, albeit marginal, rise in business activity in November. The area was one of only three to register an increase in output, alongside London and Scotland. Nonetheless, new business decreased for the fourth successive month as ongoing Brexit uncertainty led to less favourable economic conditions.

“The return to expansionary territory did not spark stronger confidence, with optimism slumping to the lowest since March amid a sustained fall in new orders and client demand. Meanwhile, employment fell strongly as firms did not replace voluntary leavers.

“Nevertheless, companies were still able to increase their selling prices, and at the fastest pace since April, despite a softer rise in cost burdens.”