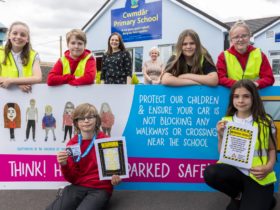 A team of business-savvy school children from Bridgend have won a national competition looking to find and nurture entrepreneurial young talent from Wales, beating hundreds of pupils across the country to the post.

[aoa id=”1″]After impressing the judges with their business acumen and entrepreneurial flair, Garth Primary School were presented with the top prize for their business idea ‘Bee-Spoke T-shirts’, bee-themed t-shirts that they designed themselves to raise awareness about bee conservation and to raise money for security for the school’s bee hive after it was vandalised.[/aoa]

Enterprise Troopers, an annual competition run by Big Ideas Wales – part of the Welsh Government’s Youth Entrepreneurship Service – brings together 5 to 11 year olds from across the country, with teams of primary school children joining together to run their own enterprises, selling merchandise and services of their choosing in their schools and local communities.

The competition aims to help pupils to apply their creativity and enterprise skills in a very practical way. It gives them an opportunity to showcase their achievements in business and demonstrate how they have developed their interests, strengths, skills and aspirations through their enterprise experience. Aligned to Welsh Government’s ambitions of the new curriculum, the competition demonstrates how schools are introducing work related experiences at this young age.

Opening the event, Minister for Economy and Transport, Ken Skates said; “It is a privilege to see our youngest pupils enjoy this introduction to business and enterprise. They are talented in applying their entrepreneurial thinking to practical solutions. Focussed on their interests, environmental and societal problems to create ethical and profit making businesses.”

He added: “In preparing young people for the world of work and life, this exemplifies the ambitions of the new curriculum to develop creative enterprising contributors.”

15 schools represented the regions of Wales at the event at Cardiff Metropolitan University, which marked the competition finale, following a month of regional finals that took place at venues across Wales in Pembrokeshire, Porthcawl, Llanwrst, Caerphilly and Newtown.

Julie Thomas, head teacher from Garth Primary School said: “This has been an incredibly valuable experience for our pupils who have learnt and developed new skills, from team work, creative thinking and budgeting. They’ve made the school proud with their hard work throughout the Enterprise Troopers competition and we can’t wait to get back there and tell everyone the good news.”

Showing their support for the pupils at the national final and each regional event were four ‘super-troopers’, which represent the key attributes of entrepreneurship: attitude, creativity, relationships and organisation.

Kevin Morgan, regional director for Business Banking and member of the NatWest Cymru Board, the event’s sponsor, said of the day’s accolades: “Garth Primary School is worthy winners of this year’s Enterprise Troopers competition, facing tough competition from across Wales. This competition is a fantastic opportunity for primary school children to develop skills which will be important in the world of work, including teamwork, creativity, working to deadlines and budgeting.”

Cardiff Metropolitan University played host to the event and sponsored the national final. Jo Bowers, Associate Dean for Innovation and International, at Cardiff Met said: “I would like to congratulate Garth Primary School on scooping first place – the standards were exceptionally high this year but their entrepreneurial spirit showed through right from the start.”

Runners-up awards were presented to Ysgol Bro Cernyw and Ysgol Llanbrynmair who impressed the judges with their business ideas of Cwmni Cynnyrch Cernyw, which makes bags and calendars to commemorate the school’s 50th anniversary, and Sebon Sbesial, which makes and sells soap.