A brave frontline nurse who has returned to work after spending six days in intensive care with the deadly Corona virus has teamed up with one of the world’s finest patisserie chefs to launch a cake-making competition to honour NHS heroes.

Mum-of-two Deanna Paule, from Wrexham, will judge the entries with Anglesey chef Richard Holt who worked in Michelin-starred kitchens, including with the BBC’s Professional Masterchef judge Marcus Wareing.

The task is to create cakes on a nursing theme and the duo are urging home bakers of all ages to take part in the competition run by the North Wales NHS charity Awyr Las.

There is a competition for adults and one for children with entrants invited to come up with scrumptious, eye catching designs for cakes to recognise the NHS’ birthday on July 5th. They are asked to submit online photos of their cakes for judging.

Winners get a prize and also choose a hospital ward or community healthcare service to receive a £250 donation.

Richard, who now runs a nationally-acclaimed tearoom in a converted grain store next to the historic Melin Llynnon windmill, near Llanddeusant, on his native Anglesey, will also turn the design of the children’s category winner into a delicious cake.

Deanna, 43, has recovered from her terrifying five-week battle with the disease and courageously returned to the front line at Wrexham Maelor Hospital isolation ward where she assesses suspected COVID-19 patients.

She hailed the cake contest as a great way for people to brighten their mood with some cooking creativity.

“It’s a great way for the public to show their support for the NHS”, she said. “As well as funds, which we badly need, events like this raise the morale of NHS colleagues.”

She had a reason to celebrate with cake herself for the birthday of one of her sons.

The happy family occasion was a huge boost after weeks of worrying about their health. But despite the joy of a birthday, Deanna has still not dared hug her sons, Ezzie, 13, and birthday boy Robin, 10, as she continues with strict safety protocols.

Deanna spent six days in the hospital’s Acute Respiratory Covid Ward and she said : “No one should under-estimate the serious health risks this virus poses. People shouldn’t think because they’re healthy they won’t become ill.

“I’ve never felt so unwell in my life, physically and emotionally. It was as if I was in a tiny boat in a big ocean, completely helpless, being rocked by giant waves of nausea, lethargy, pain and fear, a continuous cycle, one after the other.”

Self-isolating in a bedroom at home, her temperature soared to nearly 40 degrees. At times she could not stand up, felt as if she was about to collapse and her breathing was laboured.

She endured repeated bouts of sickness, dizziness, fever and diarrhoea and lost her senses of taste and smell.

When she nearly passed out in the shower she called an ambulance, was taken to hospital and admitted to intensive care.

She was prescribed oxygen to help her breathe and liquid morphine for agonising pain.

She said: “I was astonished how quickly I became seriously ill. From feeling tired after a long shift, by the time I got home I was exhausted, my temperature was out of control and the next morning it had gripped my whole body and mind.

“People don’t realise what an emotional toll this virus can have, compounding physical symptoms.

“As a patient on the intensive care unit I knew many nurses personally. Having familiar faces around like that was encouraging and helped me overcome the depression.

“But I felt bad for fellow patients experiencing loneliness on top of other symptoms as they couldn’t have visitors.”

She is now imploring the Government and NHS bosses to introduce follow-up checks on people who have recovered but may still be experiencing emotional trauma, and is pleased that Awyr Las is funding additional emotional support for staff and for people affected by Covid-19.

She said: “We need to ensure their mental wellbeing in the weeks and months after they recover, as we don’t yet know what the long term emotional toll of this virus will be.”

Deanna, originally from the Philippines, trained at Bangor University to register as a UK nurse and is now settled in Wrexham with her care assistant husband, Renz, and their two children.

She said as a nurse she practised social distancing at home even before she caught the virus and she added: “I’ve not been able to cuddle my sons for weeks. They know about the job I do and how easy it is for the virus to spread.

“The thought that I could infect them and my husband worried me constantly while I was ill, especially as both my sons are diagnosed with asthma.”

Deanna and Renz are also asthmatics and Deanna is still being monitored by a respiratory consultant following her recovery but she wanted to return to work for her patients.

She said: “I know exactly what they’re going through and it can be reassuring for them when I tell them how I also had some of the same symptoms. They know I really understand.

“Thankfully becuse of the quick action of the ambulance team I had all the treatment needed and I’m so grateful too to Ward Sisters Awi and Claire and Matron Wendy as they were with me and supported me as I recovered.”

Kirsty Thomson, head of fundraising for Awyr Las, said: “We’re delighted that Deanna and Richard are supporting this competition which promises to add some fun and creativity to the very serious business of tackling this pandemic.

“2020 is the International Year of the Nurse and Midwife, so the theme for the cake competition this year will be Nurses and Midwives.

“The cake competition coincides with the NHS’s birthday and we’ll be using the occasion to celebrate the collective efforts of the community during the pandemic and thank everyone that’s been so supportive of the NHS in recent times, as well the staff that go over and above, like the wonderful Deanna.”

Richard, who starred in a television programme, Rich a’i Felin Felys (Rich and his Sweet Mill) made by Caernarfon-based TV production company Cwmni Da, felt honoured when asked to promote the Awyr Las competition because it was one way of using his skills positively to help hard pressed NHS staff like Deanna.

He said: “It’s important we maintain this momentum in future and do everything possible to support the NHS.

“This is a vital service which saves lives but for too long as a society we’ve taken it for granted.

“It’s unfortunate it’s taken a pandemic like this to re-awaken our appreciation of the NHS. We must campaign for it to be given more resources.”

He is looking forward to baking the cake designed by the eventual children’s winner, adding: “I’m excited to see what they come up with.”

Richard himself created a cake in the form of a crown which he sold in support of the NHS.

He said: “It involved luxury ingredients and intricate design. We sold them for £15 each which is pretty expensive for a little cake but they sold out, with £5 from every sale going to our NHS charity, Awyr Las. It was incredible how demand took off.”

He also mowed the grass around the Melin Llynnon windmill in the shape of the letters NHS.

He said: “When I settled back in Anglesey I bought the island’s only working windmill to restore as a visitor attraction.

“I planned to open a simple tearoom next door but people heard of my skills as a patisserie chef and started turning up in droves. So the tearoom has become a big draw and the windmill a sort of side dish.”

Due to lockdown the tearoom is currently closed so Richard has turned his attention to other projects like filming his TV series. He has also bought a historic watermill nearby and hopes to restore it.

For details about the cake competitions and how to enter visit www.awyrlas.org.uk/cake-comp 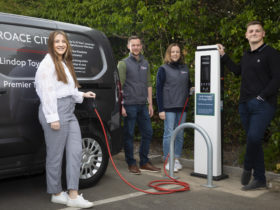 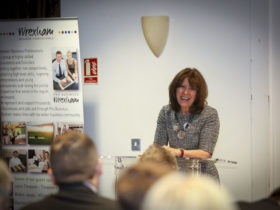 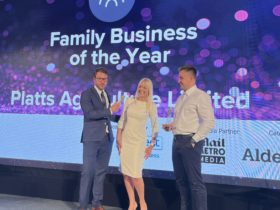 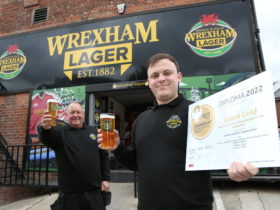