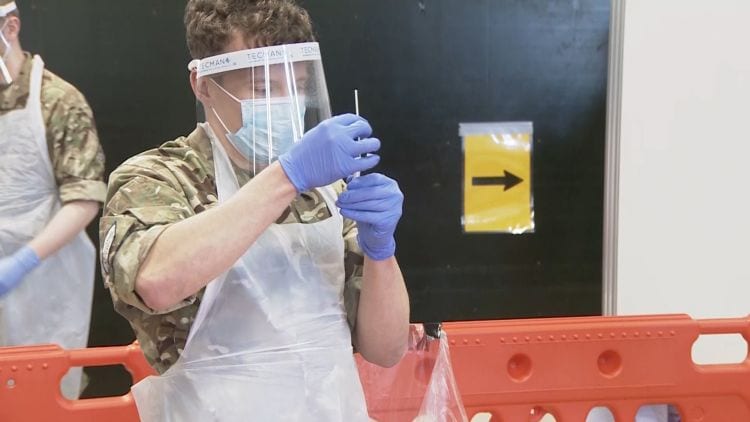 Mass Testing in Merthyr Tydfil to continue until Friday

A cancer diagnosis is always devastating news – but Daniel McCabe knows it could have been so much worse.

After enduring weeks of agonising back pain which spread to his legs, the Swansea dad was referred to the Rapid Diagnosis Centre being piloted in Neath Port Talbot Hospital.

In the space of one morning he underwent a series of tests and had a diagnosis of Hodgkin’s Lymphoma – a cancer of the lymphatic system.

Daniel started his treatment a day later and he is still undergoing chemotherapy five months later.

He said he was so grateful for the Rapid Diagnosis Centre (RDC), as without it his life would have been very different.

“I’m so incredibly lucky this got diagnosed here, and how fast it happened.

“I could be in a wheelchair. I could have had a colostomy bag for the rest of my life. I’ve got two young children and the effect on my family would have been catastrophic.”

GPs with concerns about patients who do not present with the traditional “red flag” signs of cancer have been able to refer them to the RDC since it opened in June last year.

If a patient does have cancer, they are referred to a specialist team for treatment without any unnecessary delays.

If they are found to have a significant non-cancer diagnosis instead, they will again be referred to the right speciality for treatment of their condition.

“As of the end of July this year we saw 258 people in the clinic where 26 cancers were diagnosed.

“We have diagnosed cancer at all stages, which means we have detected some early.

“Detecting cancer at an earlier stage usually means a better outcome for the patient.

“But even if cancer is detected at a late stage, we can make sure the patient gets the help and support they need.

“We have also diagnosed two patients who did not require any active treatment and are being regularly monitored to see if their cancer progresses.”

Patients are seen in the centre within five days of being referred by their GP. They arrive around 9am and may undergo a series of tests, with the potential of receiving a diagnosis within a few hours.

Daniel had suffered back pain which got progressively worse and his legs started becoming numb. He was in too much pain to sleep, pacing the house instead and once managing just two hours’ sleep in a 50-hour period.

He attended the RDC in May, just two days after his GP referral. The day after his diagnosis, Daniel started radiotherapy at Singleton Hospital. He is now halfway through a chemotherapy course and is generally doing well.

Daniel said: “Being able to come here and get everything done so quickly has made a massive difference.

“I was diagnosed with stage four lymphoma which meant it had spread to my bones. If I hadn’t been sent here, I don’t know how long it would have taken for me to have all the separate scans to get a diagnosis.

“I’d probably be in a wheelchair. My legs were getting increasingly worse. I’m still struggling with them but even a week later and the damage to the nerves would have been irreparable.”

Although a small but significant proportion of patients seen at the RDC receive a cancer diagnosis, many more have the rapid reassurance that no sinister disorder has been found. This allows them and their families to get on with their lives.

Richard Adams from Cwmtwrch in the Swansea Valley, had existing health problems but was referred to the centre after losing six stone in weight and feeling generally unwell.

Tests confirmed he did not have cancer and the weight loss was down to anxiety.

“Being told I didn’t have cancer was such a big relief. Everyone here was wonderful and the service was marvellous. It was all done so quickly.”

Richard was diagnosed with a heart condition shortly before being referred. Staff at the RDC checked his medication management and changed it so he would feel better.

Helen said: “Our aim is to diagnose cancer at an earlier stage, but overall we try to find a reason for the patient’s symptoms.

“We have picked up several non-cancer diagnoses which could have been life-altering.

“If the patient needs to see a consultant or another speciality, we will organise this without referring back to their GP to do.”

The pilot service is funded by Wales Cancer Network, with Macmillan supporting it by providing additional funding for a clinical nurse specialist.

A similar pilot is also under way in the Cwm Taf University Health Board area, with both teams sharing their findings and learning.

The Neath Port Talbot centre’s clinical lead, Briton Ferry GP Heather Wilkes, became an advocate of the service after seeing one in action in Denmark, which was having fantastic results.

“All the evidence and our own personal experience shows that people who have a serious diagnosis such as cancer that don’t have the obvious red flags, do very badly,” said Dr Wilkes.

“It takes quite a while to get a diagnosis by which time you have often missed a potential point to intervene – or the patients are admitted as an emergency, which is distressing for them and for their families.

“There are also some people that you worry there’s something wrong and you can’t get them investigated in a timely manner and then the tests all come back clear.

“That’s great. They can get on with life. But they’ve spent months worrying there is something wrong.”

Dr Wilkes said the RDC had been a massive success.

“Patients are seen within a week. It’s a very easy process and the referring GP gets a letter back electronically within 24 hours with all the information, all the results and all the plans for the future.

“The whole system is so quick, easy and streamlined.”