Around half of cancer patients (52%) in Wales face anxiety during their treatment new figures have revealed today.

The figures published by Macmillan Cancer Support also show that around a quarter of cancer patients (23%) face depression during their treatment.

These new statistics have been released ahead of Macmillan’s single biggest fundraiser, the World’s Biggest Coffee Morning, which last year raised over £27 million across the UK.

The number of people living with cancer is increasing with 1 in 2 of us expecting to receive a cancer diagnosis in our lifetime.

By 2030 around 250,000 people are expected to be living with cancer in Wales – enough to fill the Principality Stadium three times over.

Macmillan receives no Government funding and relies almost entirely on public donations to support the increasing number of people living with cancer in Wales.

Macmillan professionals work with cancer patients across the spectrum from diagnosis to treatment and recovery to end of life care. Its Support Line responded to over 150,000 calls and web enquiries in 2017[v], with the charity providing a range of medical, practical and emotional support and advice.

Matt Batten, who was diagnosed with testicular cancer in June 2016 and finished treatment in July 2017, said:

“Finding out I had testicular cancer and then having treatment really took its toll on my mental health. It can be a very lonely place as you don’t really want to burden friends and family with how you’re feeling.

“I had terrible anxiety following my treatment – something that wasn’t mentioned at all as a side effect or when my Doctor was explaining post cancer treatment.  I really do think that issues like anxiety and depression need to be talked about, and talked about far more openly and earlier in the process.

“Men rarely talk about how they’re feeling which just makes matters worse. But I know from experience there’s a lot of help available, as long as you know where to look for it. Much more needs to be done to let people know what support is available to help them deal with the mental impacts of cancer treatment.”

Richard Pugh, Head of Services for Macmillan Wales said: “Around 19,000 people are told they have cancer every year in Wales[vi], and we know that hearing this news and going through treatment has a considerable mental impact. These statistics paint a vivid picture of just how front and centre the psychological impact really is.

“More and more people are living beyond their cancer diagnosis and as a result demand for our services is increasing. From our flagship £5m investment into a new specialist care unit at Y Bwthyn, to our growing number of dedicated Macmillan professionals, we are reaching across communities in Wales to make sure people living with cancer can live life as fully as they can.

“It takes a community to care for people with cancer. Macmillan’s ambition is to be there for everyone with cancer, but we will only achieve that with the continued support of the Welsh public. No matter how big or small, every coffee morning really can help to change lives and we would like to offer a huge thanks to everyone taking part.” 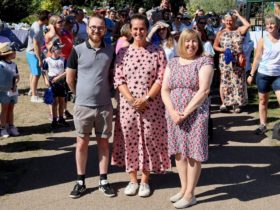