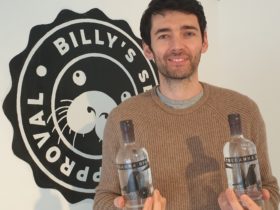 A restaurant at a five star caravan holiday home and touring park in Southern Snowdonia, which is popular with caravanners from Shropshire and the West Midlands, has been named Best of North Wales in the Restaurant Awards 2019 – Welsh Edition.

Nineteen.57 Restaurant and Bar, based at Islawrffordd Caravan Park, Talybont, near Barmouth, collected the award at a ceremony held at The Exchange Hotel, Cardiff.

Chef Sion Wellings, who took over the lease of the restaurant with his mother, Iola, confessed to being surprised when he was told the restaurant was one of 10 in North Wales shortlisted for the award.

“Someone had nominated us for the award which came as a big shock to be honest,” he said. “We haven’t tended to enter awards or to seek recognition with stars. We have just focused on serving good quality food.

“It’s the first award we have won and we were not expecting it. I am due to leave in January to concentrate on working on my house, so it’s nice to finish on a high.”

Sion and Iola have run the restaurant for five years and he was previously sous chef at Portmeirion for eight years.

“Hard work, dedicated staff and a good working relationship with the owners have brought success to our business venture,” said Iola. “The owners have a restaurant and bar to be proud of for park customers and locals alike whose support has generated a winter and seasonal clientele.”

In a joint statement, the directors of Islawrffordd Caravan Park, Gwynfor, Dylan and Geraint Evans and John Billingham, congratulated Sion and Iola for their award success. “We would like to thank them for achieving everything we hoped our £750,000 investment in the restaurant and bar would bring,” they said.

“Whilst we are sorry to be losing them as tenants, we wish them every success with their change of direction and will be doing everything we can to ensure that the high standards set by Sion and Iola are maintained in the future.”

A spokesperson for award organisers said: “The awards have acknowledged the restaurants for the overall experience they provide to their guests, including the friendly staff, comfortable environment, excellent ambience and rich menu, amongst other criteria.

“We would like to congratulate all finalists and winners for contributing to making the country well known for its great food, creating an ideal destination for those who seek some time to relax, enjoying either a good street food or eclectic dishes.”

The park was named Best Campsite in Wales by the AA in 2012 and was a finalist at the inaugural Mid Wales Tourism Awards in October. 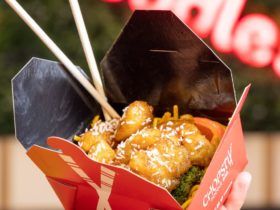