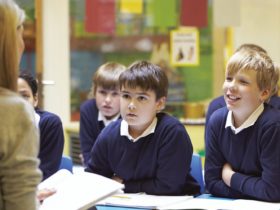 A Cardiff Met lecturer was given the opportunityto exhibit at the inaugural European Art-Science-Technology Network festival.

Alexandros Kontogeorgakopoulos spent one week at the University of Manchester for the European Art-Science-Technology Network (EASTN-DC) festival on 25-30th June. It was the first festival organised by the network and the scope was to celebrate innovations in digital media with concerts, installations, workshops, and discussions with media industry partners from around Europe.

The six days festival took place at the School of Music, the Novars Research Centre which specialises in the areas of Interactive Music and Media, and at the Home Centre for International Contemporary Art, Theatre and Film at the heart ofManchester.

Alexandros exhibited the audiovisual installation Quantum Music #002. The visual component of the piece was premiered during the festival while the music component was composed in 2014 as an Art-Science research project founded by the Welsh Crucible with Daniel Burgarth, a Physicist from Aberystwyth University.

He also gave three presentations and assisted in the workshop GENESIS – Physical Modelling and Simulation for Musicians and attended two workshops in music diffusion and analogue semi-modular instruments building.

His presentation Music in the Body included a live demonstration and gained the attention of the academic team in the Novars research centre which lead to further discussion for future collaborative projects related to haptics and multichannel music diffusion. Moreover, his talks NOMADS | Stiwdio andDigital Fabrication and Musical Instruments Design inspired a Post-Graduate student from the University of Manchester to start a PhD research in a similar question.

Speaking about the festival, Alexandros said:

“Exhibiting at the EASTN-DC festival was a great experience and I am honoured to have been chosen to represent Cardiff Met and showcase my work. It was great to be able to present on different topics to like-minded individuals and inspire others to research further.”

The European Art-Science-Technology Network (EASTN-DC) is a forerunner of the next digital revolution, bringing together 16 partners, from the European Union, Brazil, USA and Canada. Supported by Creative Europe, it will present research, technology and creativity from NOVARS and EASTN-DC.